A few days ago, and contrary to what some beauty canons establish, Caroline Oltra made the decision to remove the breast implants which had been placed years ago. He did this to put his health first, as he made clear in a lengthy post on his Twitter account. instagram. “And one day I was free and I said ENOUGH to these toxic bags filled with heavy metals hurting my body”celebrated at the beginning of the publication, in which he also showed an image of himself in a clinic bed, while holding in his hands the prostheses which had just been removed.

Over the days, the model counted her evolution, to keep her followers informed, who celebrated and encouraged each of her steps. A few hours later, the model shared a short video in her stories in which we saw her resting: “24 hours after explantation and here I am! The medical team is essential! Eternally grateful”wrote and labeled the professionals who were in charge of the intervention. 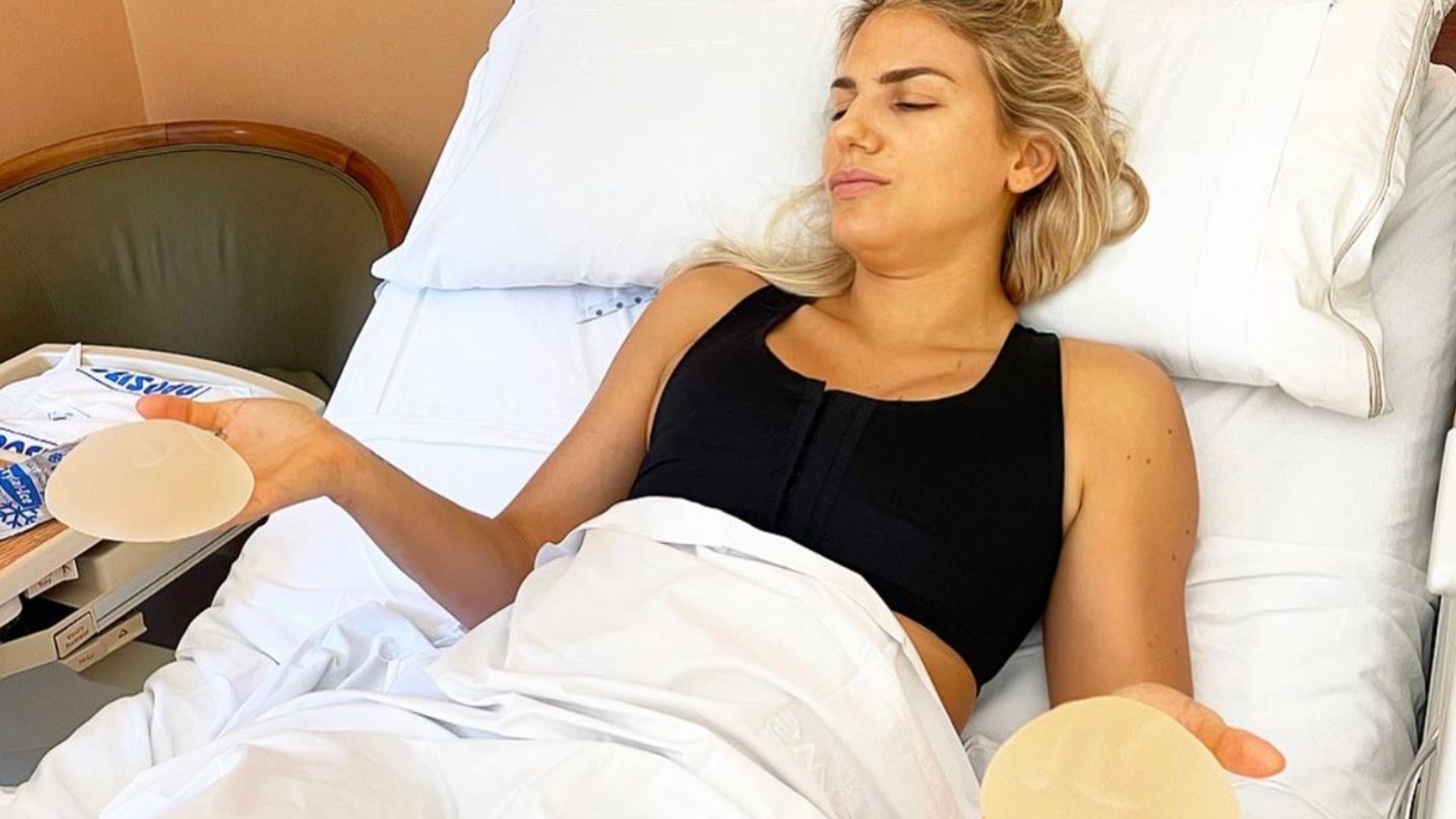 The model showed the implants after the operation

A week after the explant, Carolina uploaded an image in which she looks radiant, under very blue skies and with some good news to share. “My happiness increases day by day! I have an incredible recovery thanks to my pre and post preparation with guided and careful nutrition. I sleep soundly and my symptoms have slowly started to improve,” he wrote and thanked all the medical staff watching every step of his recovery. “Without your support and the warmth of the whole team, it wouldn’t have been the same!”he pointed out.

The days passed and in addition to the good wishes, the wishes of his supporters were repeated so that he would show the result of the explantation. And in the last few hours, he did it through his Instagram stories. “For those who ask me how I did it”, advanced Carolina and showed four photographs, two with the before and two with the after, and both with the same model of bra, one orange and the other in an animal print design. Here he again mentioned his doctor, Carolina Schneider, and described his work as “impeccable”. 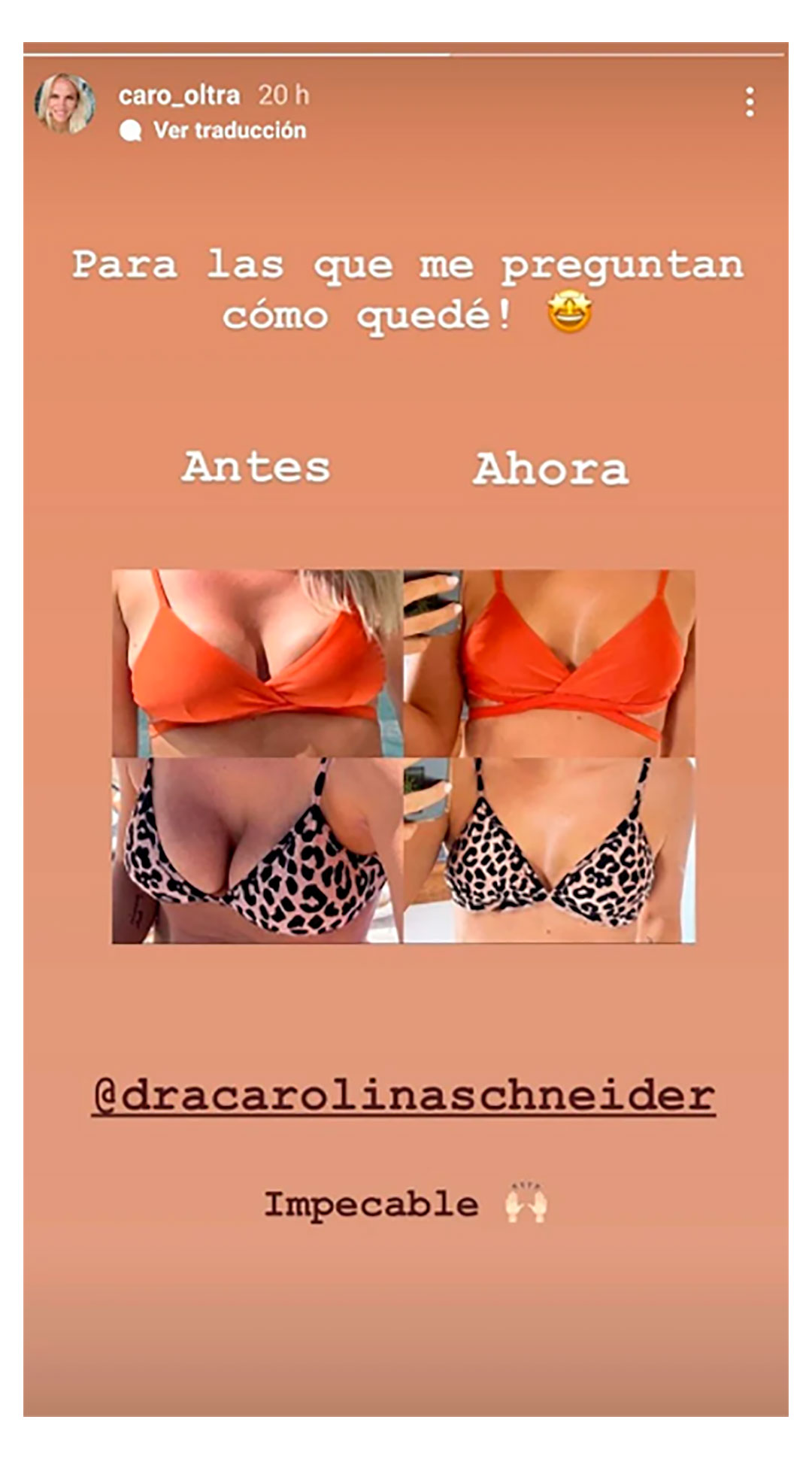 The before and after of Carolina Oltra

During this period, the daughter of the memorable motorist Silvio Oltra tried to raise public awareness of the risks of this type of surgery. “Did you know? Breast implants are large foreign bodies that interfere with and weaken the immune system, leading to immune dysfunction and often autoimmune symptoms. The weakened immune system allows opportunistic pathogens to take hold . The body remains vulnerable to viruses, bacteria, parasites, fungi and other invaders against which it would normally be able to defend itself, causing serious infections and reactivating dormant viruses.”, he wrote in the long post in which he recounted his decision.

“Besides, the implants are made from a mixture of neurotoxic and carcinogenic chemicals and heavy metals which slowly break down and build up in the body, causing an overload of toxicity. All implant shells are made of silicone and are semi-permeable. Upon implantation, they release heavy metals, silicone, and chemicals that can migrate and be stored throughout the body.“, he added.

And he explained the consequences that they can trigger: “Silicone is an adjuvant and an endocrine disruptor. It is an internal irritant that has the ability to modulate immune, endocrinological and neurotransmitter functions. The silicone that leaks from breast implants comes in a low molecular weight form that is very toxic to the body. Its widespread effects induce silicone toxicity and can affect many functions. Exposure to toxic chemicals leads to immune disorders (autoimmunity, allergies, recurrent infections), accelerated aging, neurological symptoms, etc.” And to sum up his message, he underlined in all caps: “HEALTH comes first”.