Scientists revealed the first image of the black hole at the center of the Milky Way on Thursday. It is a body in space with a large mass and a small volume that absorbs any matter or energy located in its field of action, including light, which cannot escape its force of attraction. This prevents it from being directly observed and examined due to its density and powerful gravity. But it is possible to detect the matter which circulates around it, before being engulfed.

The collaboration, a project known as EHT (Event Horizon Telescope) presented, in several simultaneous press conferences, the “silhouette” of the black hole Saggitarius A* on a luminous disc of matter, three years after having obtained that of a similar hole in the galaxy M87.

this picture is similar to that of the gigantic black hole of the distant galaxy M87much larger than the Milky Way and the EHT published in 2019.

Scientists believe it it proves that the same principles of physics operate at the heart of two systems of very different sizes.

black holes are called stellar when they have the mass equivalent to three times that of the Sun, and they are classified as supermassive when their mass is equivalent to thousands or even billions of Suns.

Images showing stars orbiting very close to Sagittarius A*, the supermassive black hole at the heart of the Milky Way. Collaboration EFE/ESO/Gravity/Courtesy Photo

Sagittarius A* (Sgr A*) was named after it was detected in the direction of the constellation Sagittarius. He has one mass of about four million suns and is about 27,000 light-years (9.5 trillion km) from Earth.

Its existence had been suspected since 1974, when an unusual radio source was detected at the center of the galaxy.. In the 1990s, several astrophysicists confirmed the presence of a supermassive compact object there, earning them a Nobel Prize in Physics in 2020. The image revealed on Thursday represents the first visual evidence of this object.

The EHT is an international network of eight radio astronomy observatories, including one located in the Sierra Nevada (Spain) and another in the Atacama Desert (Chile). In 2019, the team made the historic image of the supermassive black hole M87, equivalent to six billion solar masses and located 55 million light years away.

The Sgr A+ therefore represents a “lightweight” in comparison. “We have two completely different types of galaxies and two very different masses of black holes, but when you look at their edges, these holes look remarkably similar.”explained Sera Markoff, Co-Chair of the EHT Scientific Council, in a press release accompanying the announcement.

“This proves that the (theory of) general relativity applies” either way, he added.

“This image shows a bright ring surrounding darkness, the telltale sign of the black hole’s shadow,” says Ozel. “The light escaping from the hot gas swirling around the black hole appears to us as a bright ring. Light that is too close to the black hole, close enough to be swallowed by it, eventually breaks through its horizon, leaving behind only a dark void in the center.”

The image presented is the result of several hours of observation carried out mainly in 2017, and after five years of calculations and simulations carried out by more than 300 researchers from 80 institutes. The image is much more difficult to obtain than that of M87* because the black hole in the center of the The Milky Way is much smaller and because there are clouds of dust and gas that stretch for thousands of light years and hide it. 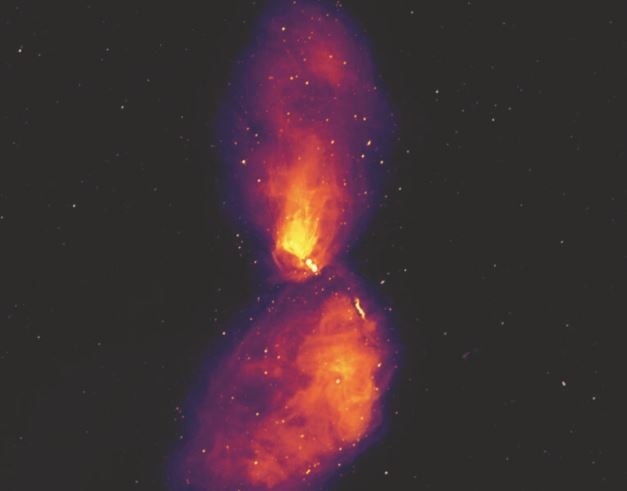 22-12-2021 Centaurus A is a giant elliptical active galaxy 12 million light years away. At its heart is a black hole with a mass of 55 million suns. Astronomers have produced the most comprehensive picture of radio emissions from the closest supermassive black hole to Earth. POLICY RESEARCH AND TECHNOLOGY ICRAR/CURTIN AND CONNOR MATHERNE LSU

The gas that surrounds it only needs twelve minutes to go around this galactic object, almost at the speed of light, whereas in the case of M87*, it takes two weeks. This means that the luminosity and configuration of the gas changed very rapidly during the observation.

“It’s as if you wanted to take a sharp picture of a dog that wants to grab its tail”, commented Chi-Kwan Chan, a scientist at EHT.

Project scientists searched for a ring of light (disintegrating superheated matter and radiation flowing at tremendous speed around the edge of the event horizon) around a region of darkness that represents the true black hole. This is called the shadow or silhouette of the black hole.

The two images available to scientists today, and their comparison, will allow a detailed study of the behavior of matter under extreme conditions, with plasma at “billions of degrees, powerful magnetic currents and matter moving at near light speed” Professor Heino Falcke, former head of the scientific council of the EHT which produced the image of M87 *, explained to AFP.

These harsh conditions will allow the exploration of phenomena such as space-time warps near a supermassive object, preceded by the theory of general relativity that Albert Einstein formulated in 1915.

There are different categories of black holes. The smallest are the so-called stellar-mass black holes formed by the collapse of massive individual stars at the end of their life cycles. There are also black holes intermediate mass, a step forward in the mass. And finally there are the supermassive black holes that inhabit the center of most galaxies. They are thought to appear relatively soon after the formation of their galaxies, gobbling up huge amounts of matter to grow to colossal size.