The journalist shared why they decided to do a religious ceremony and what he thinks about having children together. He also revealed how much they collected from guests to donate. Look at all the photos of the couple.

Jorge Lanata married this Saturday with lawyer Elba Marcovecchio. After the religious ceremony, and before the Feast of the Exaltation of the Cross at Dok Haras, the journalist spoke to the press and showed his happiness: “I want to be with her always”.

“Getting married at an advanced age is not so bad. I’m getting married because we met, because I always want to be with her. It may or may not have happened. Often, it is not a question of seeking. We find, we do not seek. When you search, you usually find nothing. And it happened to me that I met Elba and decided to get married,” he confessed after being consulted on why he had decided to marry at this stage of his life. .

He also talked about the possibility of expanding the family: “We don’t know if we’re going to have a child. We leave it with ellipses”.

And he added: “Family goes beyond what formal family is. Because obviously Elba and her children are my family today, even though they have been since before. Also my own daughters compared to her. But also Sara (Her ex) is my family. And also Andrea, Barbara’s mother. The family is not what it was before. And I feel that they are close to me even if I am no longer with Andrea or Sara.

“My children were happy. Valentino wanted to participate and gave the rings to Jorge and Alegra is more shy. They are happy because they love Jorge. And they are also Catholic and that this happens in the Church for them has the sense that it is for life,” Elba said.

Then Lanata explained why they had decided to organize a religious ceremony, presided over by Father Guillermo Marcó, who was Jorge Bergoglio’s spokesman. “I believe in God but I’m not a practicing Catholic, but she is. And I thought it was good to engage in the Church with her like we just did. We went out a very nice ceremony and then we did the civil,” he said.

Elba was also excited: “Getting married is a life project, it’s choosing yourself for the rest of your life. And it moves me because Jorge appeared in my life and my life was happier from the moment where he appeared. And that’s what I want for the rest of my life. And for me one swears before God, so for me marriage is before the gods, in the Church”.

“It was very good. I hadn’t been to church for a thousand years and I really enjoyed it. I found what he said moving, the environment, what Elba said from me, what I know. It was really, really good.” Lanata acknowledged.

The couple also opened up about their coexistence. “In principle, we’ve done one thing that has worked well for us so far, and that’s we live in the same building, but not in the same apartment. And that’s good because some days she’s with me all the time, other days she’s not. There is nothing defined. Yes when we go on vacation, for example. I think it’s going to continue like this, I think it’s good that she can run to my house in her pajamas and so can I,” Lanata shared. Although she did elaborate: “We are not afraid of coexistence.”

Finally, the couple shared how it came to be that Lanata proposed to his wife. “After two years together, one day it occurred to me to say ‘well, let’s get married’. I proposed to her, gave her an engagement ring and that’s how it was. happened and then we set the date. There was no place here. And people here said “well, the 23rd”. And two days later I realized that it was San Jorge. Nothing is accidental, “said the journalist.​

“I didn’t expect him to propose, I thought he was gonna take me to Hawaii. But I still prefer marriage,” Elba joked.

Asked about the gifts from the guests, Lanata revealed that they had already been collected five million pesos that will be donated at the dining room Los Piletones, by Margarita Barrientos. 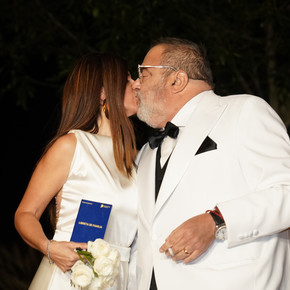