The beta pvp from Monitor 2 is officially live, and those lucky enough to have received an email or Twitch invite are already playing. Having spent four hours with A_Seagull in the background, I was also able to enter the renovated hero sand from Snow storm; I have to admit with great anticipation because with over a thousand hours played through the original, one comes up with some pretty concrete ideas of how the game should feel. And the truth is that, at the moment, the experience is quite good. But I have compelling reasons to be concerning in the face of the attractiveness and even the longevity of this version.

OW2, of course, is one of those games that looks the same at first glance and then feels quite different thanks to its list of small big changes — changes that will not be enough to convince those who already see it as “same game 2”, but will certainly lead to many new tactics and some of the most enthusiastic debates. It affects the retouching from various characters, to the passive skills of each role, but I think the most noticeable change is that of the composition of 5 against 5 players in which each team plays two DPS, two support characters and a single tank. Let’s talk about this topic.

Much more logical and fun action

Without fear of being wrong, I would say that decadence from the original Overwatch it has nothing to do with updates; it was rather a question of pleasure. The game has had and has too barriers, shields, bubbles, counterattacks, freezes, stuns, and even an invincibility mechanic. For a long time it was perfectly possible to combine Reinhardt’s giant shield with Orisa’s at the same time, while Symmetra charges another that literally covers the whole map 100% and Brigitte supports with the barrier triplet, thrust and stun. As new characters arrived, it became slower or less satisfying play and it was not an individual problem, but one of Sandbox.

What I love most about OW2 is that by realizing this mistake, Blizzard found virtue in to delete things instead of adding them. We have fewer shields, firstly because there is now only one tank in each team and secondly because these tanks have changed – Doomfist now falls into this category with a new defense mechanism that he can only use on himself, while Orisa directly sacrifices her shield in favor of the durability of her natural armor. Even the DPS has adapted to this philosophy, so that the Cassidy’s Flash Grenade becomes one of the damage that sticks to the opponent.

Keeping a single tank alive is more exciting: all the attention is on that character.

Taken together, these changes make Overwatch 2 a game more tense. While playing Soldier 76, I notice that sustained fire puts a lot more pressure on the other team; like Mercy, some resurrections are the difference between winning or losing; and as a Sigma I need to think better about resource management but at least I get more healing than before. I think playing well is more rewarding because it’s more satisfying and the victories seem more deserved than before. That’s the big breakthrough for the sequel, along with some other things that I liked too.

Overwatch was never created with a single tank in mind.

And it shows. My favorite character is Roadhog, who has traditionally had the role of off tank; a secondary, complementing the capabilities of the primary. So much so that the first thing I do when the main tank breaks down is assess the situation to decide whether to retreat or not. But in Overwatch 2, he is alone. Even with 700 HP (a hundred more than the original) it’s weird. Naked in the face of danger. unnatural. Similarly, like Reinhardt, one needs to develop a new way of understanding what to do when the shield loses some of its maximum capacity, or breaks – it’s no longer worth backing off and waiting for the second tank takes position.

It’s bad? Is this a review? Not necessarily, it is early to assess this type of situation; but of course it’s a worry. In OW2, these characters are more dependent than ever on their comrades, and vice versa. In just a few hours, I’ve seen teams using Doomfist as a tank spread even more easily than in a fast-paced OW1 game because it’s a mobile tank with clear limitations for holding the frontline. There’s no line of defense there that everyone can orbit around, and I suspect that’s going to put a dent in the low elo games or more occasional facet. 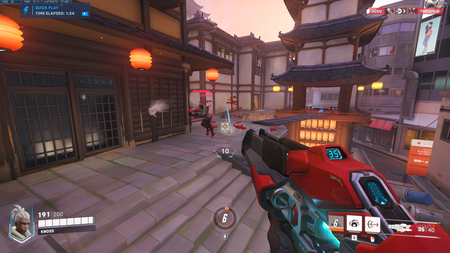 Sojourn combines automatic projectile fire with a laser that works like a hitscan.

Of course, Overwatch doesn’t put up any barriers when it comes to character switching, so we’ll have to wait a bit and see if some are simply better prepared than others depending on the situation. Yes the team coherence this is a very real potential problem, especially since it’s been professional players who have been playing and sending impressions to Blizzard for a long time. They are the ones who know the game best, but they are proportionally in the minority. And now that the beta is in the hands of almost everyone, the opinions that emerge are contradictory. Some think the game loses its identity, and others think it feels much better. That’s what I think: it depends on who you play with, more than ever. We’ll see if we don’t go back to 6 against. 6 in more casual formats.