Skip to content
Vu Duc Sang shows off his car and his flag. The youtuber and a group of friends took a year to make this copy of a Bugatti Chiron with mud and fiberglass

Who hasn’t dreamed of one day owning a supercar when they were a child? It was probably with the first scale toys, building race tracks on the floor of the room, or in the garden. Some succeed, others resign themselves to quitting in a dream, others come out otherwise.

Vu Duc Sang, founder of Vietnam’s YouTube channel NHET TV, took a year to make his own Bugatti Chiron, which was recently revealed to cause both amazement and anger. the The Bugatti Chirón is one of the most sophisticated, powerful and expensive sports cars in the worldsince buying one requires having nothing less than $3 million. then do a homemade copy, no matter how well done, does not appeal, especially to brand managers.

While the surprise and sympathy of this particular car “made in Vietnam” is the technique and the materials with which it was built, since the main element is natural clay or red slime, whatever you want to call it. 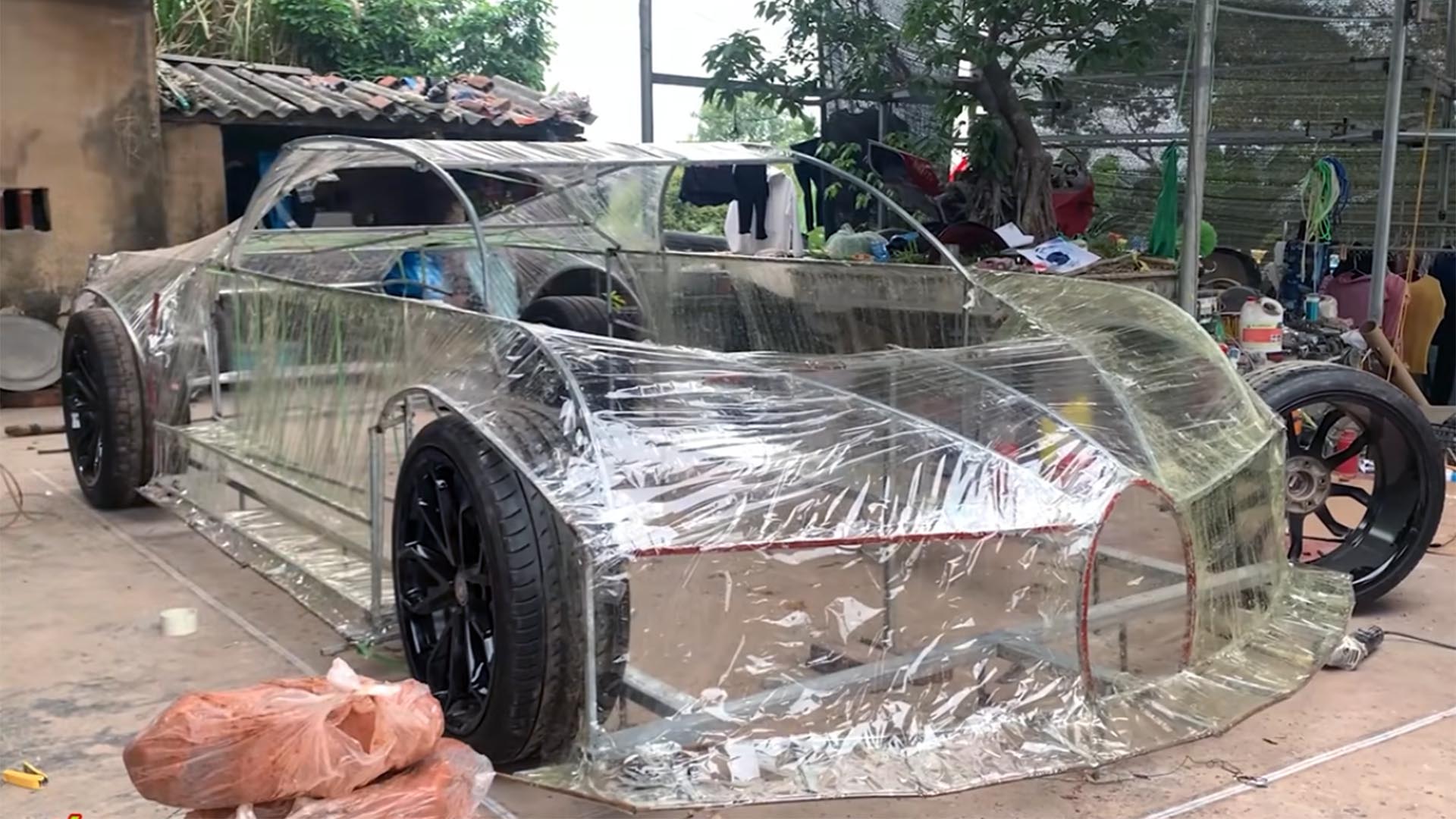 The structure of pipes covered with transparent tape, on which the mud would then be stuck, which is already waiting next to the car

The first thing the team that collaborated on the construction of the Chiron clay did was draw in the most detailed proportions possible a structure of pipes which would be mounted on a sort of frame of square pipes. This structure had to have the shape of the body since the only way to mold the mud was to make it adhere to this profile.

So, once the matrix is ​​complete, we used transparent masking tape to create a surface that connected each pipe, on which the clay was placed. And when it dried up, it started to shape the final shape with sandpaper, saws, and carpentry and pottery tools. A technique that is not unheard of in the industry, as it is the one used to create unique concept cars that are shown at auto shows. 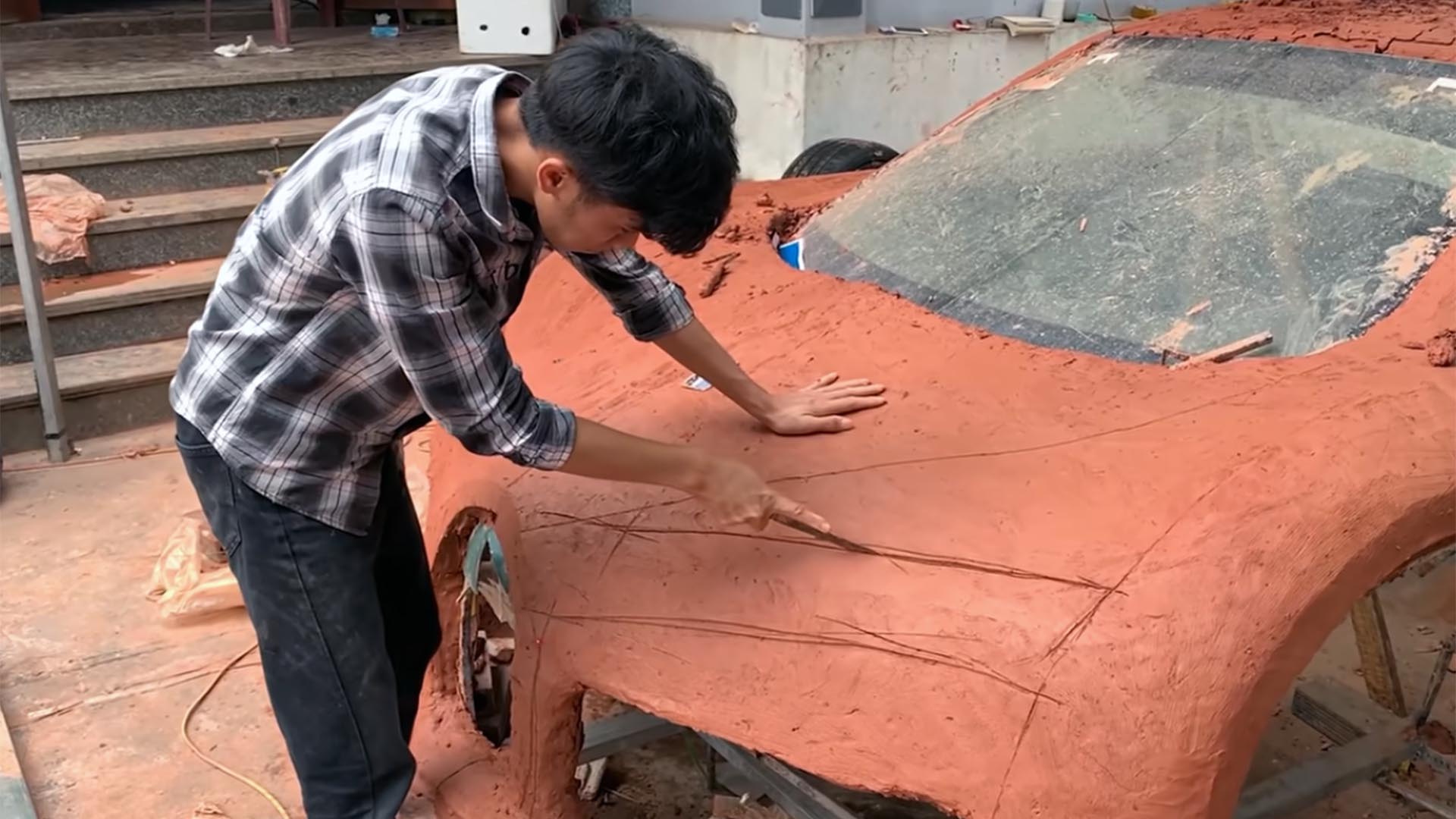 Once the surface was covered, the cutouts began to be made to insert the headlights, grilles and openings.

Once the shape of the mud body was completed, we proceeded to cover with fiberglass both on the upper layer and on the lower side, and it was not until this work was completed that the smoothing was redone, so that the surface ready to paint At this stage, the cutouts have been made for the parts to be integrated outside and the ventilation grilles or air outlets.

They were placed replica optics on the front and clay and fiber work done on the backto which cuts have been made to add Interior LED strips, which were hidden by being painted red as in the original lights. They were also built exterior mirrors with the same technique. 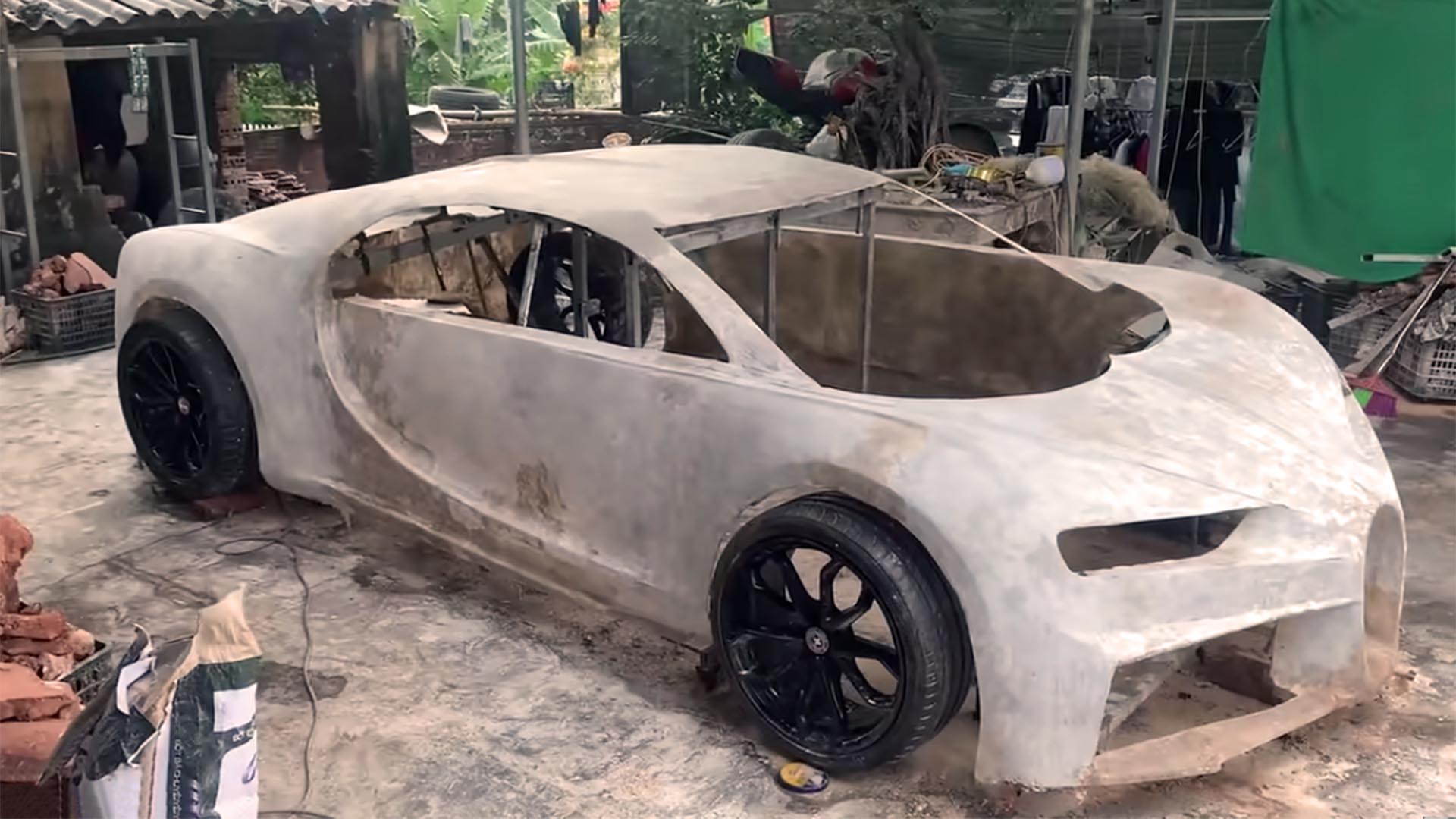 The body with the fiberglass process on the mud, which gave the material rigidity and sanding and painting possibilities.

The windshield they got wasn’t exactly the same as the Chiron’s, so there’s one detail that’s obvious from afar, proving that it is an in-house Bugatti. The interior was also constructed of clay and fiber, then covered in synthetic leather. Car electronics do not exist, only basic controls for the operation of a simple mechanical car were introduced with buttons and keys.

Mechanically, the propulsion was resolved with a Toyota 1.8 4-cylinder engine with its corresponding gearbox.although, to try to maintain the spirit of the Bugatti, this engine was located in a central rear position. 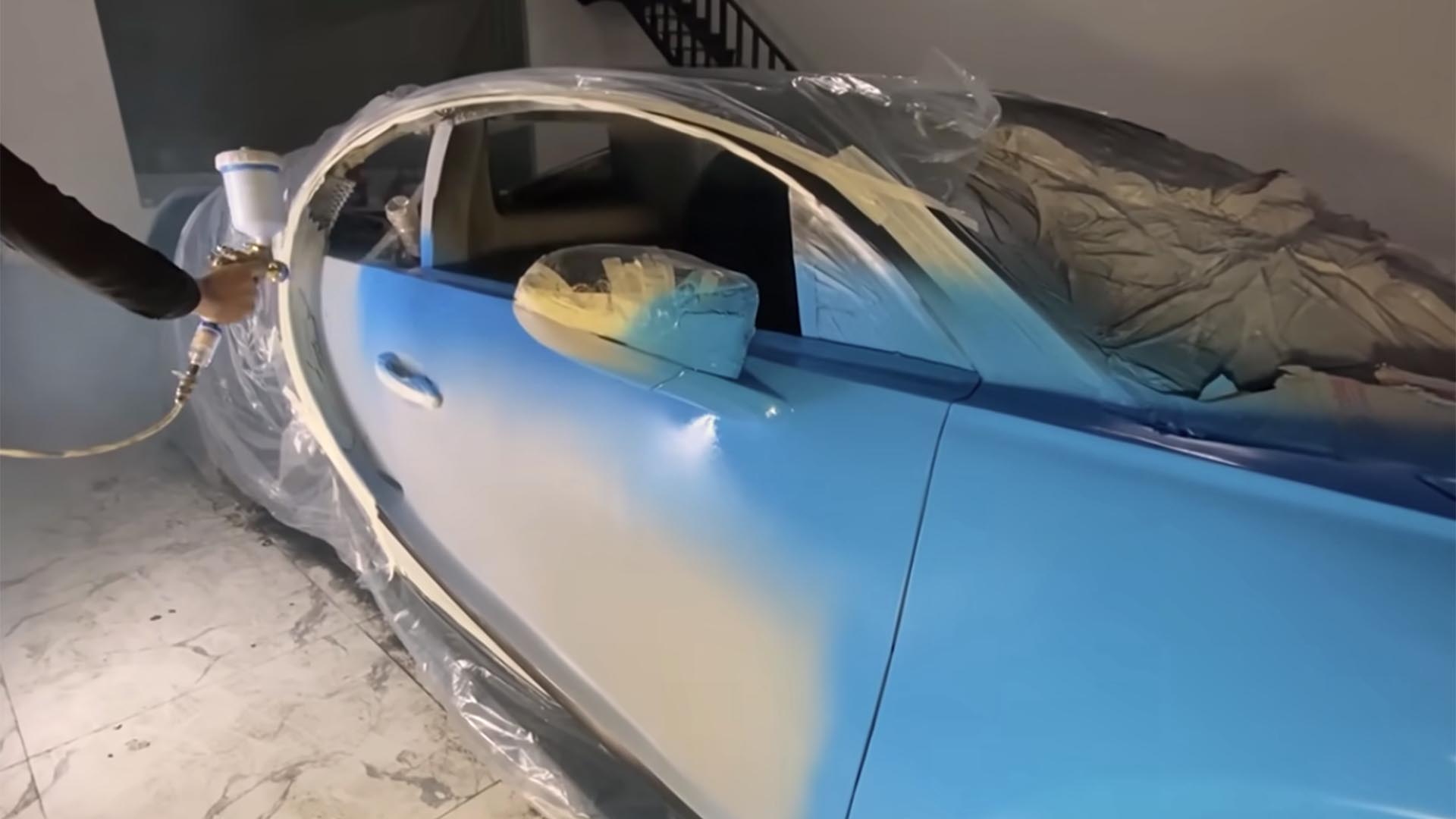 The final stage of the paint finished leaving the Bugatti mud looking like the real car, combining blue and black.

The whole process was uploaded to NHET TV’s YouTube channel, creating a “Bugatti mud fever”. At the end of the construction, the total of the views of each added chapter has exceeded 40 million views.

Once finished, Seen Duke Blood and his friends noticed that the surface and paint quality had not been as good as expected, so they set a new goal and decided to improve it. For that they completely disassembled it again, smoothed and polished the surface and painted it pearly white. It was better, more elegant and neat, even if it is still a copy of the form and nothing more. 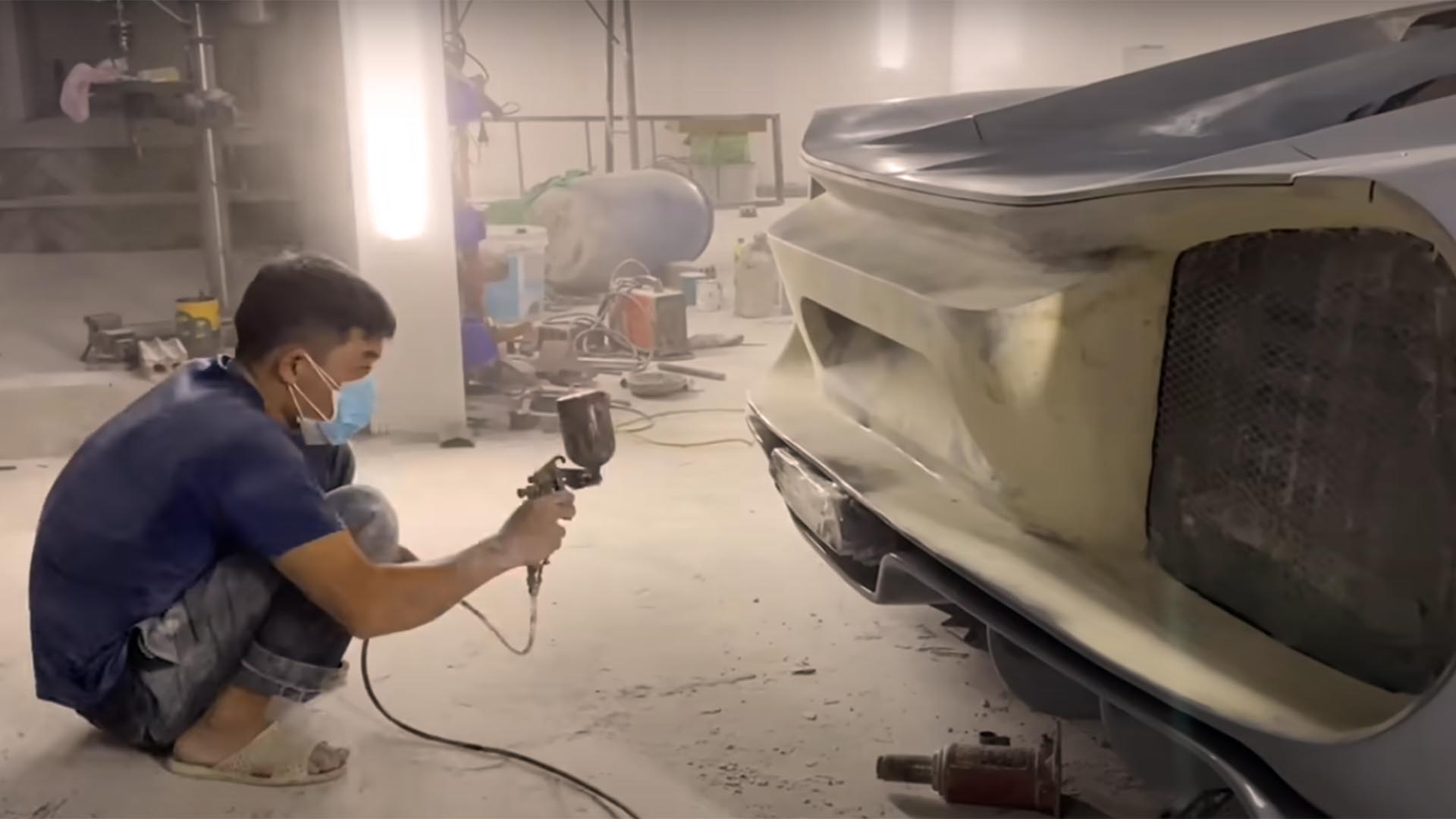 When finishing the car, and noticing that the details could be improved. They decided to take it apart completely, smooth it out better and paint it pearly white

The car cannot legally drive on the streets, as it has no crash protection, no proper braking system, but rather discs with holes to hold the wheels and small calipers. But Seen Duke Blood He had fun, built his own Chirón and made a lot of money with his YouTube channel.