At a press conference in 2007, JK Rowling, the then universally adored creator of the Harry Potter saga, revealed that she had always believed that one of the most beloved characters from her books and films, Albus Dumbledore, was gay. We had to wait 15 years, until the new movie of the Potter universe, the recently released Dumbledore’s Secrets, to see how the mighty grand wizard confessed his love for another man.

The scene in question, like the film itself, was a major disappointment, so short that, in an act of betrayal on the part of the producers, it was able to be removed from the version shown in China without the dramatic progression of the film prevents it. be modified At this time, however, Rowling’s – and by extension, the Potter brand’s – issues with the LGBT+ community were far more serious.

Before continuing, a confession. Throughout my teenage years, I avidly read the Harry Potter novels, and I secretly wanted to find LGBT+ characters in one of the strands of this story that I loved and felt was my own. Being a closeted trans and bisexual man, not only could I not freely inhabit my own world, but I also felt that in this other world there was no place for people like me either. In the Potter universe, the most fanciful and imaginative storylines are commonplace, but when it came to gender and identity, it was all cis conservative and straight.

However, despite the lack of direct representation, many members of the LGBT+ community have seen themselves in this boy who emerges from a closet under the stairs – first with his family and then with the world – he faces dark forces and finds others who live from the same way as him on his way, while trying to understand what are these changes he is going through.

But that world, which was such an important part of my life and helped me feel less alone for a long time, is now destroyed. I will always cherish the memories I made with other LGBT+ fans of the show, but I just can’t help but think of all of the author’s violent comments about trans people every time something related to the Potter universe comes up. The magic ran out, and it was Rowling herself who was responsible for destroying the enchantment.

It’s easy to talk about separating the work and the author when talking about theory. It is much more difficult to do so when the author in question reproduces hate speech that threatens your existence. And it is that in recent times the opinions of Rowling, once considered a humanist, have become increasingly conservative – although disguised as radical feminism.

The peak of this radicalization – so far – occurred at the beginning of April this year, when in the UK the ban on conversion therapy for LGB people, excluding people trans, was up for debate. A few years ago, when the first accusations against her began to surface, the British writer flatly rejected being transphobic and promised that she would always raise her voice in defense of trans people.

The marches that took place regarding the exclusion of trans people from the conversion therapy ban were the perfect time to demonstrate that, as she had sworn, she was not transphobic. Rowling, however, had nothing to say.

Not only that. Meanwhile, the writer hosted a lunch at the River Café, an exclusive West London restaurant, with a group of outrageous activists and ‘gender theory’ (sic) critics. One of the participants, Helen Joyce, author of Trans: when ideology meets reality, anti-trans bible, shared the photos from the encounter saying she celebrated her “fellowship” with Rowling.

Many of us wonder how things could have come to this, but the truth is that Rowling’s public displays of transphobia didn’t start overnight. “It was a mistake, a moment of awkwardness of a great person” then apologized one of his assistants in statements to the newspaper The sun after her followers noticed a like on her Twitter account to a post that treated trans women as “men in dresses”. This was curious, as Rowling’s allegedly accidental likes were increasingly aimed at transphobic comments.

Many fans wanted to ignore what was going on, trying to exaggerate trans people who warned about these signs, while others claimed their books were actually written by ghost writerstrying to conjure up an alternate universe where Rowling didn’t create the boy wizard, and so the stain of her hatred of trans people couldn’t touch Harry Potter.

While we readers hoped that was the end of his TERF era, what followed was quite the opposite. In June 2020 and in the midst of a pandemic, the definitive rupture occurred. The writer shared an article about the post-Covid world that talked about the need to create a fair environment for “menstruating people”. It was this inclusive term for women that infuriated her, writing on Twitter: “’People who menstruate.’ I’m sure there was a word for these people. Someone who helps me. Wumben? Wimpund? Woomud?

According to Rowling, when talking about people who menstruate, women are erased (“women”, in English), instead of incorporating other groups. The magical world I loved so much was falling apart while I checked out how annoyed my favorite teenage author was that I, as a trans man, was included in something as basic as a term to be named in public and health policies. What Rowling doesn’t understand is that making someone visible doesn’t mean eliminating another, and that our lives aren’t numbers in a zero-sum game. 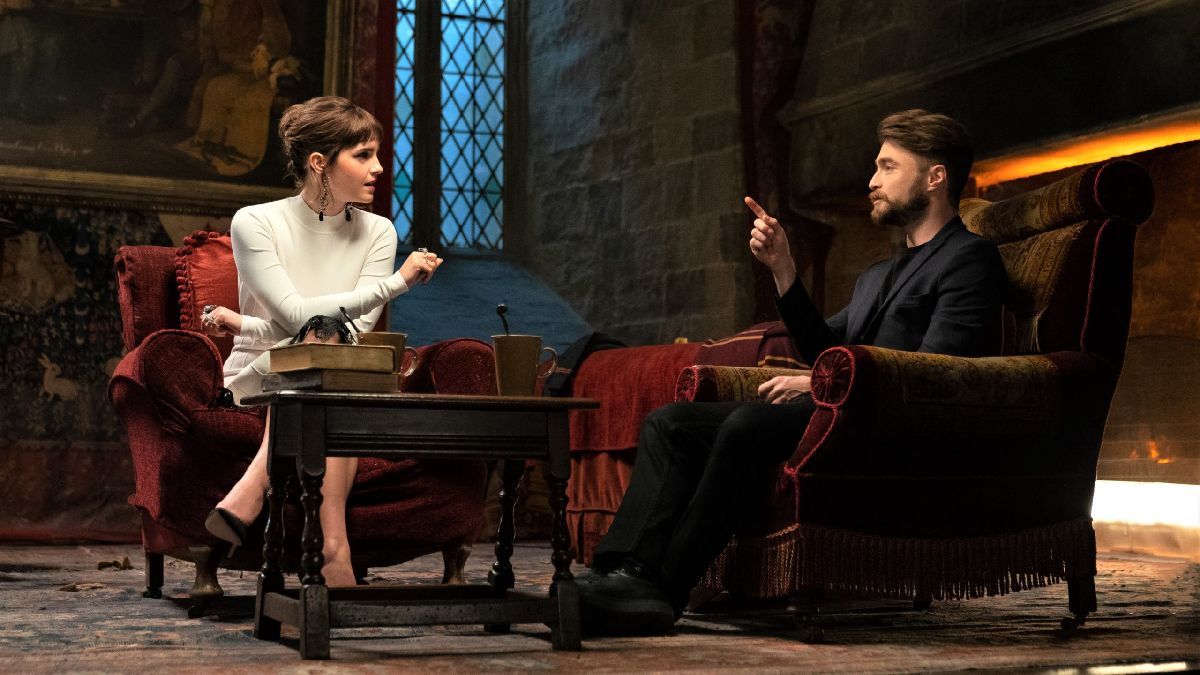 The Harry Potter cast reunion did not include Rowling (HBO Max).

From then on, her contempt for trans people became more and more explicit, and her fixation on the subject reached the level of obsession, causing, among other things, that she was not invited to the special reunion of the cast of the Harry films. Potter which aired earlier this year on HBO Max (Daniel Radcliffe himself, who played Potter, said that trans women are women and that any statement contrary to this idea denies the dignity of trans people). Rowling, who was portrayed in some reactionary corners as a victim of “cancel culture” (Putin himself recently came to her defense) had become a toxic asset.

As depressing as it was to watch her spend her free time tearing down trans rights as a hobby, I don’t think I have enough authority to say that someone can’t see their films anymore, or that their works should be boycotted, beyond what I can feel.

But those who continue to support Rowling, meaning to help her continue to generate economic gain and therefore continue to be a person of power, They must be clear that they are collaborating in the dissemination of hate speech that misinforms us and puts us in danger.

The Potter universe can be damaged – the lackluster box office Dumbledore’s secrets This seems to indicate it – but the real problem is that its creator, a still very influential woman, does not respect the right to life of trans people. And history has given us enough examples to know that hate speech is more than just rhetoric, and is only the prelude to more violence and death.

The author is a journalist and writer. In June, he will publish his first book, “I was always there”, by the Aguilar label.