The government has ordered compulsory social immobilization of all people in their homes in Metropolitan Lima and the constitutional province of Callao from 02:00 a.m. to 11:59 p.m. this Tuesday, April 5. However, andn social networks are circulating a call for a march against the government despite the curfew.

According to the publication, the mobilization It would take place from 3 o’clock in the afternoon in Plaza San Martín. Although the groups calling for this march were not specified, the hashtags #FueraCastillo and #CastilloDicator were posted.

The clashes multiply on Abancay Avenue. National police began throwing tear gas canisters to contain the situation, but protesters responded by throwing rocks and sticks. The situation got out of control.

From social networks, they report that the St. Martin’s Square It is already crowded with demonstrators demanding the resignation of President Pedro Castillo. Meanwhile, several blocks from the Arequipa Avenuea large number of demonstrators can be seen marching towards the Center of Lima.

CONGRESSES GO OUT AT THE AV. ABANCAY TO CALM PROTESTERS

Congresswomen Rosangella Barbarán (Popular Force), Patricia Chirinos (Advanced Country) and Norma Yarrow (Advanced Country) They came out of Parliament to calm the spirits of the demonstrators. They told the press that they reject Pedro Castillo’s actions and blame him for the excesses that have happened these days.

“We did not agree with this meeting with Pedro Castillo. We know it’s all a farce, there’s no solution or protests. Talking to Castillo is wasting time. Nothing will come out, neither good nor bad”Shirinos said.

With the Peruvian flag hoisted high, several people attempt to force their way into Parliament. The PNP suppresses them, but they are unable to contain their attempts. Clashes resume at any time.

Members of the National Police of Peru and demonstrators clashed in their attempt to reach the Congress of the Republic. A group of demonstrators tries to break the siege of the PNP, which suppresses its attempts by the use of force.

EVENTS OUTSIDE THE CONGRESS

The citizens try to reach the Congress of the Republic, where is President Pedro Castillo. A cordon of the National Police of Peru prevents the passage to the Parliament.

The demonstrators try to join the Congress.

From different points of the capital, the citizens walk with the pole of the Peruvian team towards the Plaza San Martín, in the Center of Lima. There is already a group of people at the concentration point, but more people are expected to arrive.

They come from different districts of the capital. 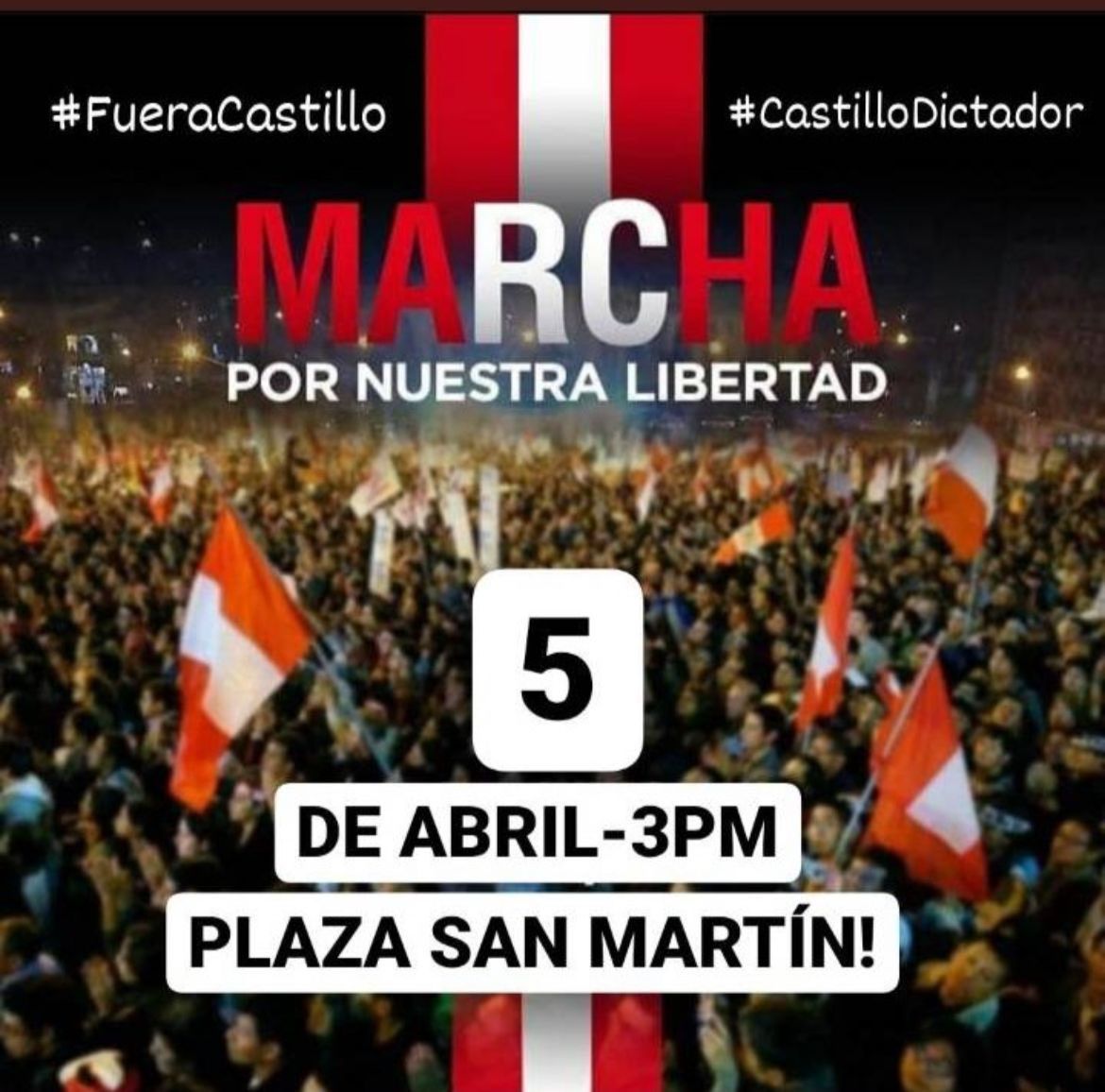 On another side, inhabitants of the central districts of the metropolis of Lima carried out spontaneous cacerolazos at noon this Friday. The noise of the pots lasted more than ten minutes in Magdalena del Mar, San Isidro, Surco, Barranco, San Isidro, Lince, San Borja, Jesús María, among others.

More and more users are posting information on Twitter about the cacerolazo lived in certain neighborhoods of Lima.

WHY IS THERE A CURFEW?

Defense Minister, Joseph Gavidia, argues that the reason for which it was decided decree compulsory social immobilization, it is because they had reports warning against acts of vandalism.

“And this is the reason why the immobilization was decreed today (in Lima and Callao), because there were reports that there would be widespread movement and vandalism“, he explained in the JT of Latina.

At another point, the minister apologized for the expressions he made the day before about the four deaths recorded during the protest demonstrations in the city of Huancayo.

“I would like to apologize for some expressions taken out of context in one way or another or mispronounced by me. I did not, at any time, want to minimize the death of these four fellow citizens in the city of HuancayoGavidia said.

Citizens march against the measures of Pedro Castillo and after the social crisis.

WHAT IS ALLOWED IN THE CURFEW?

– Pharmacies and parapharmacies can provide care.

– The staff of the written press, radio or television can move provided that they carry their personal work card, their respective journalist title and their national identity document for identification purposes.

-Travel with a private vehicle is authorized or pedestrian of people who need urgent or emergency medical attention because their life or health is in serious danger; as well as for the acquisition of medicines.

-The workers of the public and private sector carry out only remote work.

Citizens march against the measures of Pedro Castillo and after the social crisis.

Note that this Tuesday no service MetropolitanComplementary Corridors or other formal public transport buses, as reported by the Lima and Callao Urban Transport Authority (ATU) in a statement released around 3 a.m.

Additionally, they indicated that in the case of taxis, as well as school, tourist and special worker transport, “they will not be able to serve during the mandatory social capital period provided for by the aforementioned rule”.

On the other hand, although initially the seasons of the Lima Metro they had been closed. At 6 a.m. this service began to operate, although with very little influx of the public. They even announced that the regular service would be ensured to mobilize only the personnel who carry out essential tasks. However, at 10 a.m. they decided to suspend the service.