Skip to content
This Sunday, Uruguay will hold a referendum in which they will vote on whether or not to remove 135 articles from the Emergency Law, the flagship law of the government of Luis Lacalle Pou Photos: Broad Front and National Party

Uruguay is in the home stretch before the referendum which will define whether to maintain 135 articles of the emergency law. A few hours before the opening of the electoral circuits, the previous scenario is marked by parity, since the latest surveys of several companies coincide in a result with a high percentage of undecided.

The Urgent Review Act, commonly known by its acronym “LUC”, concerns a set of 476 items that changed several rules. There are articles related to public safety, education, the right to strike, the new rent without guarantee regime, the fixing of fuel prices, the relaxation of money laundering controls, among several others.

It reached parliament in March 2020, when the country came under the command of President Luis Lacalle Pou. The law, although it had votes in favor of the Broad Front (a group of left-wing parties), it was adopted by a parliamentary majority thanks to the coalition of right-wing parties that formed during the election campaign. From then on, it became the flagship law of the government of Luis Lacalle Pou.

After the dissatisfaction of the Broad Front, supported by activists, leaders and citizens, a collection of signatures began to repeal 135 articles of the LUC in a referendum. On December 8, 2021, the Electoral Tribunal recorded the 671,544 signatures necessary to allow the referendum, which will be voted on this Sunday. 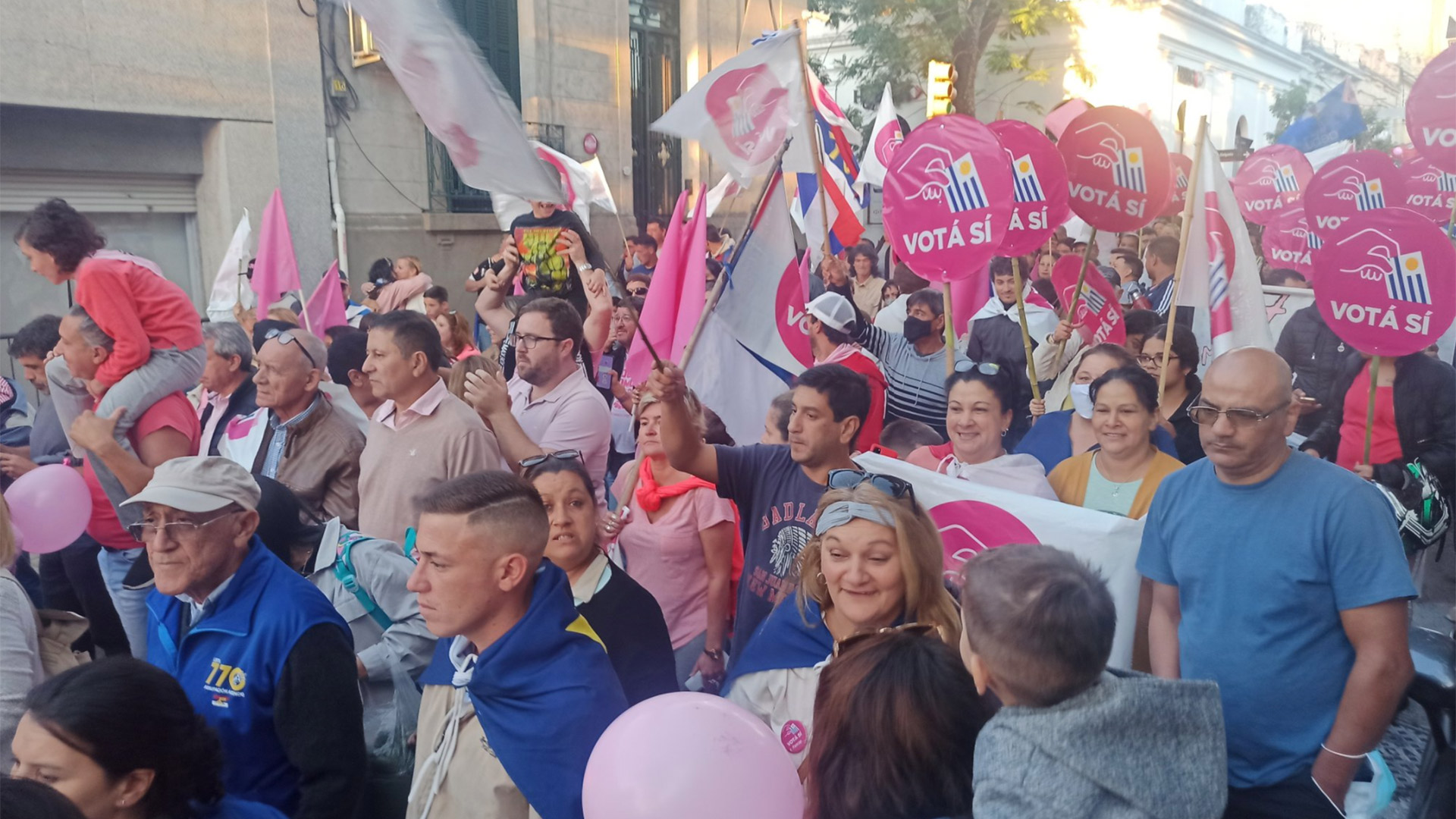 On December 8, 2021, the Electoral Court registered the 671,544 signatures necessary to allow the referendum, which will be voted on this Sunday Photo: demonstrations in favor of “Yes” in Montevideo

The Uruguayan Parliament was divided during the vote. On the one hand, there were parties with more right-wing ideologies (the National Party, the Colorado Party, the Independent Party, the Open Council and the People’s Party), this so-called “multicolored coalition”. On the other, the group of left-wing parties, the Large Front.

The “yes” (pink ballot) is a vote in favor of deleting the 135 articles. The “No” vote (light blue ballot) signals the will to keep the law unchanged. The option that obtains 50% + 1 of the valid votes will win.

In this situation, the regulation also establishes that the option to vote blank will be considered a vote for “No”, or for the light blue ballot.

Beyond the legislative consequences of the vote, there are also others that are symbolic. Two years after the government of Luis Lacalle Pou and after fifteen years of presidency of the Broad Front (twice the former president Tabaré Vázquez and once the former president José Mujica), the results of the referendum will mark the second section of the executive power.

Ultimately, what will vote is also the declaration of the citizen, his support or not for the government.

ANDhe vote for the referendum is secret and compulsory for the 2,684,131 people entitled to vote. Information on the electoral circuits can be consulted on the web courtelectoral.gub.uy, where it is divided by department. In addition, a search engine has been incorporated where voters can enter their name and automatically obtain the address of the place where they are voting.

Authorized persons must vote in the circuit that corresponds to them and take into account the fact that they must do so within their own department. In this case, the interdepartmental vote is not authorized.

As in every electoral body at the national level, several situations are prohibited. Among them, we find proselytizing propaganda in the written, radio or television media (begun last Friday) and the sale of alcoholic beverages, the ban on which began on Saturday at 7:30 p.m. and continues until the close of voting on Sunday. 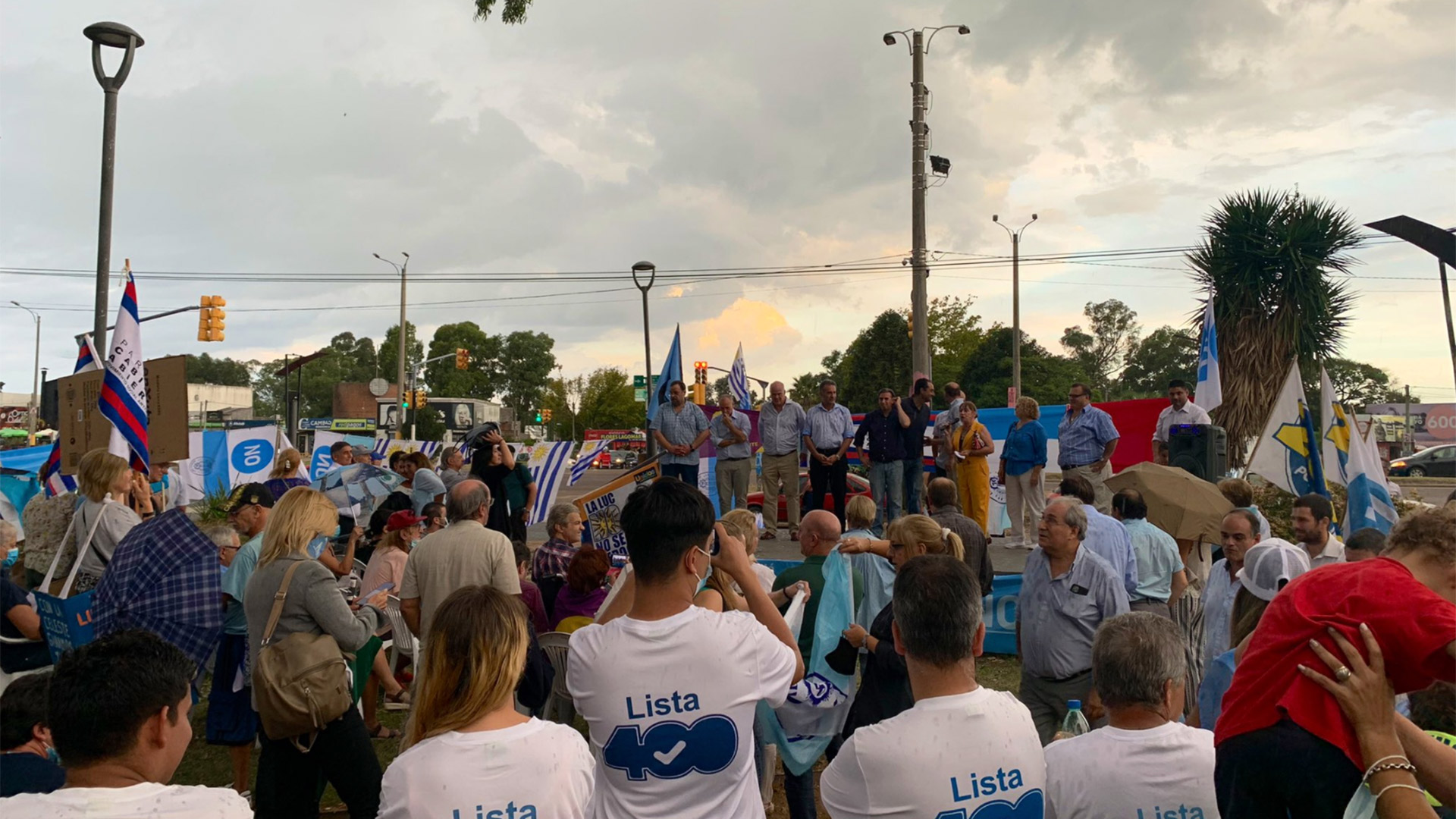 The Electoral Council wants to guarantee the opening of the electoral circuits from 8 a.m. on Sunday March 27 Photo: demonstrations in favor of the “No” in Montevideo

For today’s example, the Electoral Council of Montevideo has made a special appeal to civil servants and public employees available to integrate the electoral tables on March 27, since there has been a drop in personnel due to “illness” . “We want to guarantee that the circuits open at eight in the morning”, said the president of the organizationMary Lopez at Telemundo.

The counting of votes is estimated for the end of the day on Sunday, but it is warned that it could be delayed towards the beginning of the week.

Those who have registered to collaborate with the Electoral Council will obtain different advantages: a public holiday for Monday, March 28 and five days off which will be added to those generated during the year.

Public notaries who do not work in State agencies will also benefit from an abatement on the payment of taxes to the Directorate General of Taxes (DGI) of 12 readjustable units (UR). The amount would be equivalent to approximately 17,136 Uruguayan pesos, or nearly $400.

The Minister of the Electoral Tribunal, José Garchitorena, indicated that the cost of this referendum will be around 70 million pesos (over one and a half million dollars), according to Montevideo Portal. What makes the situation more expensive, it seems, is the software used for the tablets in the circuits.

People who do not vote in the referendum or justify not having done so, will be exposed to the payment of a fine equivalent to one Readjustable Unit1,428.01 Uruguayan pesos (US$33).

This figure is doubled when the person who did not vote is a public official or has the status of professional holder of a diploma issued by the University of the Republic.

Consulting firm Equipos published its latest survey on March 9, where it said that th35% of Uruguayans would vote for maintaining the 135 articles of the LUC with the light blue ballot. 34%, on the other hand, would vote for their repeal on the pink ballot. At the same time, there were 28% undecided, 1% who would vote blank and 2% who would vote cancelled.

On March 22, the pollster Cifra stated that according to its latest poll the “no” would obtain 45% of the votes, while the “yes” 41%. They also reported that 10% were undecided, 2% would vote canceled and 2% white.