Skip to content
Chernigov, devastated gateway to Russia when it invaded Ukraine

Day 83 of the Russian invasion of Ukraine: The Ukrainian army considers its mission accomplished in Mariupol. The General Staff of the Ukrainian army said on Tuesday that the soldiers who resisted Russian military forces at the Azovstal steel plant.

“The uniting of the enemy’s main forces around Mariupol gave us the opportunity to prepare and create defensive lines. We have critical time to form reserves, consolidate forces and receive help from our allies,” the Ukrainian side says.

12:50 p.m.: Russian Deputy Minister Andrei Rudenko assured that between Russia and Ukraine there are currently “no kind” of peace talks. “Negotiations are not continuing. Ukraine has in fact abandoned the negotiation process,” Rudenko was quoted by the agency as saying. interface.

12:00 p.m.: Russia said 265 Ukrainian troops, including several wounded, surrendered to the beleaguered Azovstal steelworks in the port city of Mariupol. “In the past 24 hours, 265 fighters have laid down their arms and surrendered, 51 of them seriously injured,” the defense ministry said in a statement, saying it would transfer those in need of assistance to a Novoazovsk hospital. Now they are “prisoners” of war, they added.

For its part, the General Staff of the Ukrainian army said that the soldiers who resisted the Russian military forces at the Azovstal steel plant fulfilled their mission, having managed to evacuate more than 200 soldiers from the area. . “The Mariupol garrison has fulfilled its combat mission. The supreme military command has ordered the commanders of the units stationed in Azovstal to save the lives of the personnel “remaining there, assured the military high command in a statement posted on Facebook and reproduced by local agencies.

10:47 a.m.: The Swedish Minister for Foreign Affairs, Ann Linde, signed this Tuesday the formal request for the entry of this Nordic country into NATOannounced yesterday by the Social Democratic government after an extraordinary meeting.

Sweden plans to present the request today or tomorrow, Wednesday, at NATO headquarters in Brussels, along with Finland, whose parliament is due to vote on the formal decision on Tuesday.approved on Sunday by the president, Sauli Niinistö, and the government.

Niinistö is on an official visit to Sweden today, which includes a meeting with Swedish Prime Minister Magdalena Andersson, with whom he will appear at 3 p.m. local time (1300 GMT).

“It’s something big, serious and like we’ve achieved what we think is best for Sweden.”Linde said in statements on public television SVT. 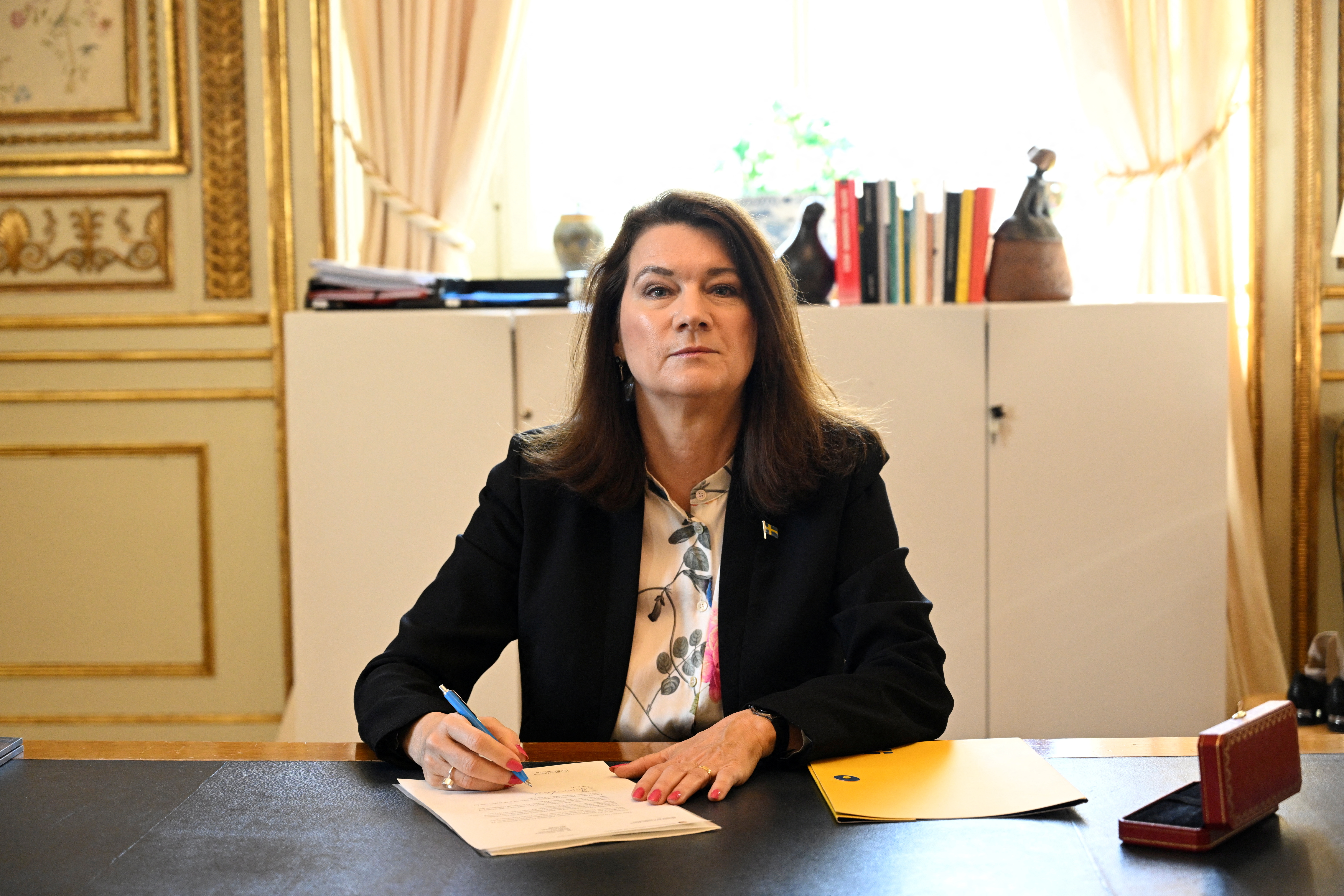 Andersson had justified the decision of his government, which put an end to two centuries of foreign policy based on non-alignment, by the new security situation created by the Russian military intervention in Ukraine.

The announcement came after a parliamentary debate in which a clear majority of parties came out in favor of membership, although unlike Finland, Sweden does not require a vote in the House, since the decision is taken by the government.

Sweden’s decision has been sung since Andersson signaled his party’s support on Sunday, in a historic turning point for a party that has made non-alignment a feature of its politics for decades and endorsed six years ago. months at its annual congress the maintenance of the current status of a NATO ally but not a member, like Finland.

07:16: Ukrainian authorities said on Tuesday that several people died and “many” were injured in a missile attack carried out by Russian forces. against the city of Desna, located in the Chernigov region (north).

The head of the Chernigov regional military administration, Viacheslav Chaus, said in a message on his Telegram account that it was “a bad morning” and detailed that “the enemy fired missiles at the village of Desna”.

“Rescuers from the state emergency service and security agencies are in the area. There are dead and many injured. I will provide more detailed information later.manifested.

05:36: Lviv Mayor Andri Sadovi reported in a Telegram message that explosions were recorded on a night when a shelling of military infrastructure in the Yavorov district was also recorded.50 kilometers west of the city.

A) Yes, Novoyavorivsk Mayor Volodimir Matseliuj said the explosion occurred in this district, located almost on the border with Poland, warning citizens not to ignore air alarms.

The same was also confirmed by the head of the Lviv regional military administration, Maksim Kozitski, who said that it was a Ukrainian military base about 15 kilometers from the border with Poland, as the reported the American channel CNN. .

The United Nations High Commissioner for Refugees reported on Sunday that more than 6.2 million Ukrainian refugees have left the country since Russian President Vladimir Putin announced a “special military operation” on February 24.

02:46: Canada is in favor of Sweden and Finland’s early entry into NATO, after the two countries expressed their desire to join the Atlantic alliance, following the Russian invasion of Ukraine.

This was stated by the Canadian Minister of Foreign Affairs, Mélanie Joly, who made these statements during a teleconference with the media after concluding a visit to Germany and Belgium, where she participated in the meeting of the G7 foreign ministers and a bilateral meeting between the European Union and Canada.

01:59: A Moscow court today fined US broadcaster Radio Liberty 18 million rubles ($280,247) for its refusal to remove content banned in Russia.

According to the press service of the Tverskói court, quoted by Interfax, the court found the media guilty in 18 open cases.

Russia classifies as prohibited information the incitement of minors to suicide, child pornography and drug use, as well as calls to participate in political demonstrations not authorized by the authorities and, more recently, the publication of “fake news” on the military conflict. in Ukraine.

01.27: As European Union leaders continue to press for an embargo on Russian oil, Hungary’s prime minister insisted on Monday that his country would not support any sanctions that negatively affect Hungary’s energy security.

In a speech to the Hungarian parliament, nationalist Viktor Orban said Hungary would not block EU sanctions as long as they “do not go beyond the red line of Hungary’s economic protection.” That is, as long as they do not compromise Hungary’s energy security.”

00.29: Ukraine’s deputy defense minister said 53 wounded soldiers were evacuated to Novoazovsk, while 211 people were taken to Olenivka, both located in Russian-controlled territories. Malyar declares that there will be an exchange of prisoners.

Some of the evacuees were pulled from the buses on stretchers and taken to hospital, the witness said.

Novoazovsk is now under the control of Russian-backed separatists who have controlled parts of eastern Ukraine since 2014.

00.18: NATO Secretary General Jens Stoltenberg on Monday acknowledged Turkey’s value to the Alliance and said he was ready to address “any security concerns” he may have regarding possible entry. of Finland and Sweden in the organization.

“Turkey is a valuable ally and any security issue should be addressed,” Stoltenberg said via his official Twitter profile after speaking with Turkish Foreign Minister Mevlut Çavusoglu.

Stoltenberg said he had discussed with Çavusoglu the decisions of our closest partners, Finland and Sweden, to apply for NATO membership.