Skip to content
A total of 2,439 Ukrainian fighters who were resisting at the Azovstal plant were captured by the Russians

In the 89th day of Russian invasion of Ukrainethe number of refugees in the world, particularly because of this conflict, has already skyrocketed to reach one hundred million people, according to the United Nations refugee agency (UNHCR).

While the number of refugees and displaced people continues to increase in Ukraine, reaching 14 million – more than a quarter of the population – the fighting continues: Russian troops are preparing to resume the offensive towards Sloviansk , in the Donetsk region, and relentlessly attacked several towns in Lugansk in an attempt to envelop Severodonetsk.

A virtual conference of defense ministers is being held in Washington to coordinate military aid efforts for Ukraine, and in the Swiss city of Davos, where its annual economic forum begins on Monday, all eyes will also be on the Ukraine, with the scheduled teleconference of the President of that country, Volodomir Zelensky.

2 p.m.: Zelensky said 87 people were killed in a May 17 Russian attack on a military base in the north of the country. “Today, under the rubble of Desna, there are 87 victims. Eighty-seven bodies, victims who died,” the president said in his message to the World Economic Forum in Davos, referring to the Russian attack on a town in the Chernigov region that hosts a Ukrainian military base.

12:30 p.m.: The Ukrainian President called for the complete withdrawal of foreign companies from Russia and offered them to continue operating in Ukraine and to participate in the reconstruction of this country after the war, speaking by videoconference before the Davos-Forum.

Zelensky called for a further stepping up of pressure on Russia, with “convincing sanctions”, he said, “on oil, the blocking of all banks without exception, the complete withdrawal of foreign companies from the market Russian”. And to these “we propose to continue to operate in Ukraine, a market of 40 million people… I invite you to be part of the reconstruction process”, he said.

09:41: Eurozone (Eurogroup) Economy and Finance Ministers will once again take the pulse of economic developments with a first assessment of the impact that the Russian war in Ukraine is having on the countries of the common currencyafter the European Commission lowered its forecast last week due to the invasion.

The new forecasts of the community executive will serve as the basis for the first discussion that the Nineteen will hold during their meeting, which will be attended by the vice-president for economic affairs of the Spanish government, Nadia Calviño. 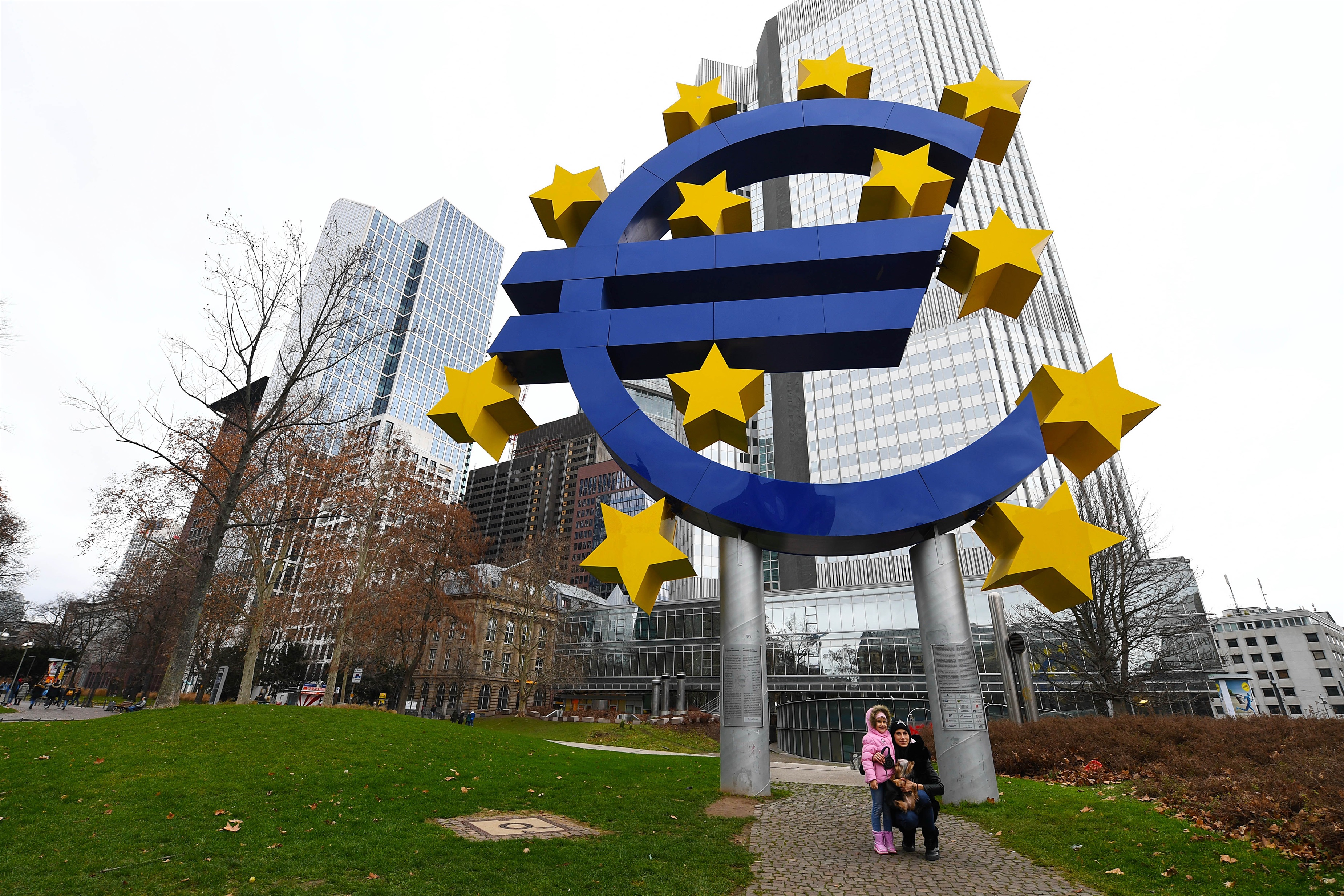 The euro symbol in front of the Eurotower in Frankfurt, Germany

Brussels, specifically, cut its GDP growth forecast for the euro zone and the EU as a whole by 1.3 percentage points this year, from the 4% it estimated in February to the 2.7% that it estimated. ‘she projects now, mainly because of the consequences of the war.

Spain is in the calculations of the Community authorities with an economic expansion of 4% this year, but it has also suffered a drop in this forecast of 1.6 percentage points.

08:58: Ukraine has assured that it will not accept any ceasefire agreement involving the delivery of territory to Russiawhile Vladimir Putin’s troops step up their attack in the eastern region of Donbass.

“The war must end with the full restoration of the territorial integrity and sovereignty of Ukraine”said the presidential chief of staff, Andriy Yermakin a Twitter post.

Polish President, Andrzej Dudatold the Ukrainian parliament that giving up even “one centimeter” of the country’s territory would be a blow for the whole West, and assured kyiv of Warsaw’s strong support for its candidacy for the European Union.

“Disturbing voices have been raised saying that Ukraine must give in to Putin’s demands”said Duda, the first foreign leader to address Ukrainian lawmakers in person since the February 24 Russian invasion.

“Only Ukraine has the right to decide its future”he added.

07:41: South Korea’s Ministry of Commerce, Industry and Energy reported on Sunday that South Korea, the United States and four other countries issued a joint statement condemning Russia for its invasion of Ukraine., on the sidelines of a meeting of the Asia-Pacific Economic Cooperation (APEC) forum.

The meeting of the 21 economies that make up the APEC Forum ended this Sunday in Bangkok without a joint declaration for not having reached an agreement between the members.

The statement from South Korea and the United States, joined by Japan, Canada, Australia and New Zealand, expressed concerns about the humanitarian situation in Ukraine and the food and fuel crisis.while calling for the immediate withdrawal of Russian troops from Ukraine, as reported by the South Korean ministry and the Yonhap news agency. 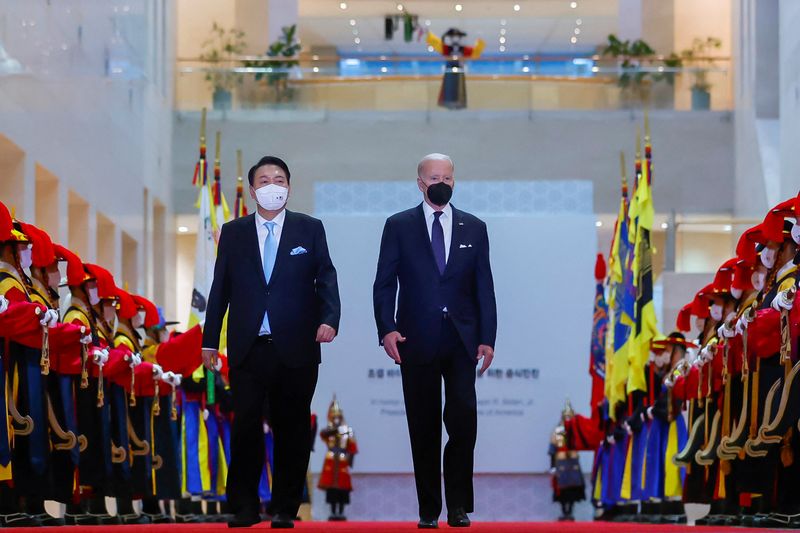 US President Joe Biden and South Korean President Yoon Suk-youl are greeted by a guard of honor during a state dinner at the National Museum of Korea in Seoul, South Korea.

The APEC Forum held a meeting on Saturday in the Thai capital, Bangkok, surrounded by some controversy as, during Reshetnikov’s speech, representatives from the United States, Japan, Australia, Canada and New Zealand left the room.

In response, the Russian delegation was absent from the Forum when the American team took the floor, as explained by the Russian Ministry of Economic Development on its Telegram channel.

06:23: Five civilians were killed and 11 injured on Sunday in shelling in the separatist region of Donetsk.in Ukraine.

“On May 22, 2022, the Russians killed five civilians in the Donetsk region: two in Lyman, one in Dachne, one in Klynove and one in Avdivka. Eleven other people were injured.assured the head of the military administration of the Donetsk region, Pavlo Kirilenko, on Telegram, as collected ukrinform.

In addition, one person was injured in the Luhansk region and received medical assistance in Bakhmut.

According to the same media, a total of 412 civilians have been killed and 1,140 injured in the separatist region of Donetsk since the start of the Russian invasion on February 24.

Meanwhile, Volodymyr Zelensky reiterated this Sunday his hope that Ukraine will obtain the status of a candidate country for the European Union (EU) in June after the Polish President, Andrzej Dudaassure him of Poland’s and his own support.

At a joint press conference in Kyiv, Zelensky said that Ukraine has long been a member of the European community, but to enter the EU, you need “powerful ambassadors and friends”according to the Polish agency PAP.

05:11: The President of Ukraine, Volodimir Zelensky celebrated this Sunday the visit to kyiv of the President of Poland, Andrzej Dudaand announced a bill that will give Ukrainians residing in Poland the same opportunities as Poles.

“I was happy to receive in kyiv the President of our fraternal Poland and my friend Andrzej Duda”Zelensky said in a speech late this Sunday. 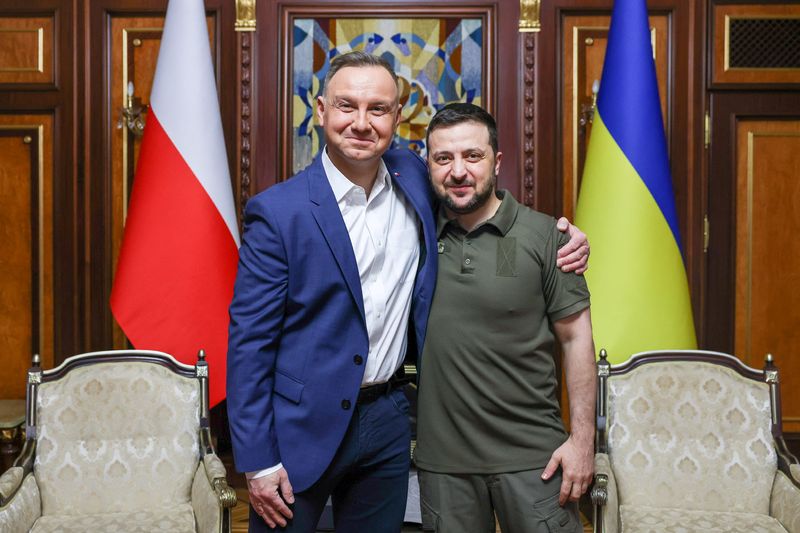 The Ukrainian President hailed the line of cooperation between Poland and Ukraine. “Ukrainian-Polish relations are finally on a completely clean and sincere basis, without quarrels and without the legacy of old conflicts. It is an exploit. A historic achievement of our nations. And I want the brotherhood between Ukrainians and Poles to be preserved forever.” Zelensky said.

Likewise, he announced a draft law for Ukrainians who “temporarily” reside in Poland, who will have “de facto and de jure the same opportunities as Poles”.

3h20: The United States assured that Russia would not be able to cut off military aid to Ukraine. According to Joe BIden’s national security adviser, Jake Sullivan, Ukraine’s arms supply chain is “diverse and resilient”.

According to Sullivan, even if Russia attacks some Western arms shipments in Ukraine, it will not fundamentally disrupt supplies.

00:33 Turkey, as a member of NATO, vetoed the entry of Sweden and Finland after accusing the two countries of maintaining ties with the Kurdistan Workers’ Party (PKK), an organization with which it has been at war for decades and which it considers a “terrorist group”.

In an interview with the YLE channel, the Finnish minister indicated that his country will continue discussions with Turkey at the official level, but the deadline has been considerably delayed.

“I already said it would take a few days. Now I have to say that you have to be patient because it’s going to take weeks,” Haavisto said.

Eurogroup to assess economic impact on region of Russian invasion of Ukraine
Ukraine has ruled out ceding territory to Russia to secure a ceasefire
The United States, South Korea and four other countries have condemned Russia for its invasion of Ukraine