Skip to content
Shooting at the Peruvian Embassy in Washington | VIDEO: Channel N

Police and Secret Service agents arrived at the Diplomat’s Building located in the 3000 block of Garrison Street NW in the Chevy Chase neighborhood.

Officers found an individual at the back of the residence who had broken several windows. Uniformed officers approached the man, who was carrying a metal pole, and pulled out their stun guns, Metropolitan Police Chief Robert Contee Jr. told a news conference. The tasers did not work and after a confrontation officers pulled out their service weapons and fired them at the man, who died at the scene.

“Shortly before 8 a.m. this morning, members of the United States Secret Service (USSS) were advised that a robbery was in progress in the 3000 block of Garrison Street. When police arrived at the scene, they located an individual at the Peruvian embassy. Also, there were several broken windows in the back of the residence. They tried to arrest this person, who had a metal rod, using non-lethal weapons and a taser, but to no avail, so the police used other weapons, shot him, and now that person is dead.”mentioned Count.

Oswaldo de la Rivero, Ambassador of Peru to the United States, is well after the shooting

by Twitter Guglielmi confirmed that the officers of the division shot the intruder whose presence was reported by the family of the ambassador who was inside the Embassy of Peru. No uniformed injuries were reported after the clash. 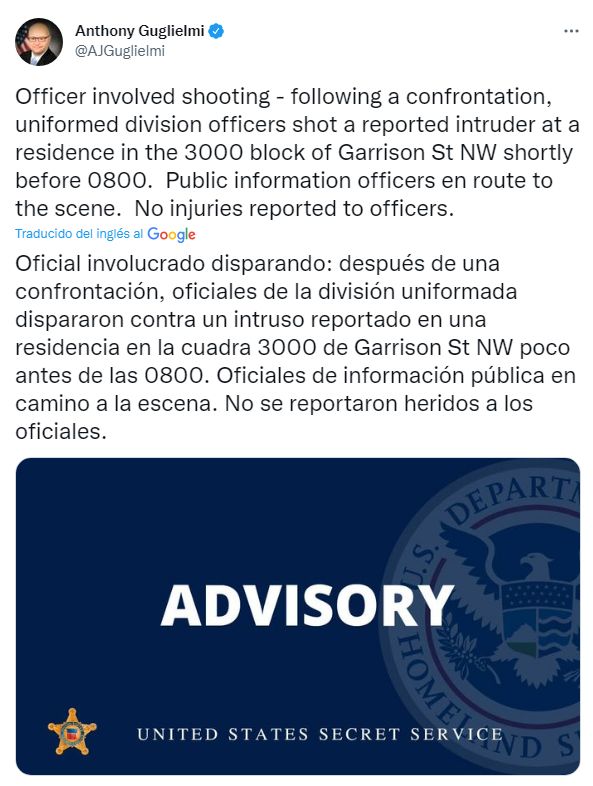 It was reported that several emergency vehicles were in and around the embassy site. It has been confirmed that the diplomatic authority and his relatives are safe and sound.

The subject killed has not been identified and Secret Service agents are investigating the facts, in addition to the background of the intruder and the reasons that led him to illegally enter the residence of the Ambassador Oswaldo de Rivero who was accompanied by his family.

A Secret Service spokesperson said agents in this unit are tasked with protecting foreign embassies in the United States.

STATEMENT OF THE EMBASSY OF PERU IN THE UNITED STATES

“The Embassy of Peru regrets to inform that today, in the early hours of the morning, a person entered the official residence without authorization, causing material damage to the property. This person was shot by the secret services.says the statement from the Peruvian Embassy in the United States after the incident.

“The Ambassador, his family, Residence staff and Secret Service agents are safe and sound, and are under investigation by the appropriate authorities.”they point out via their Twitter account. 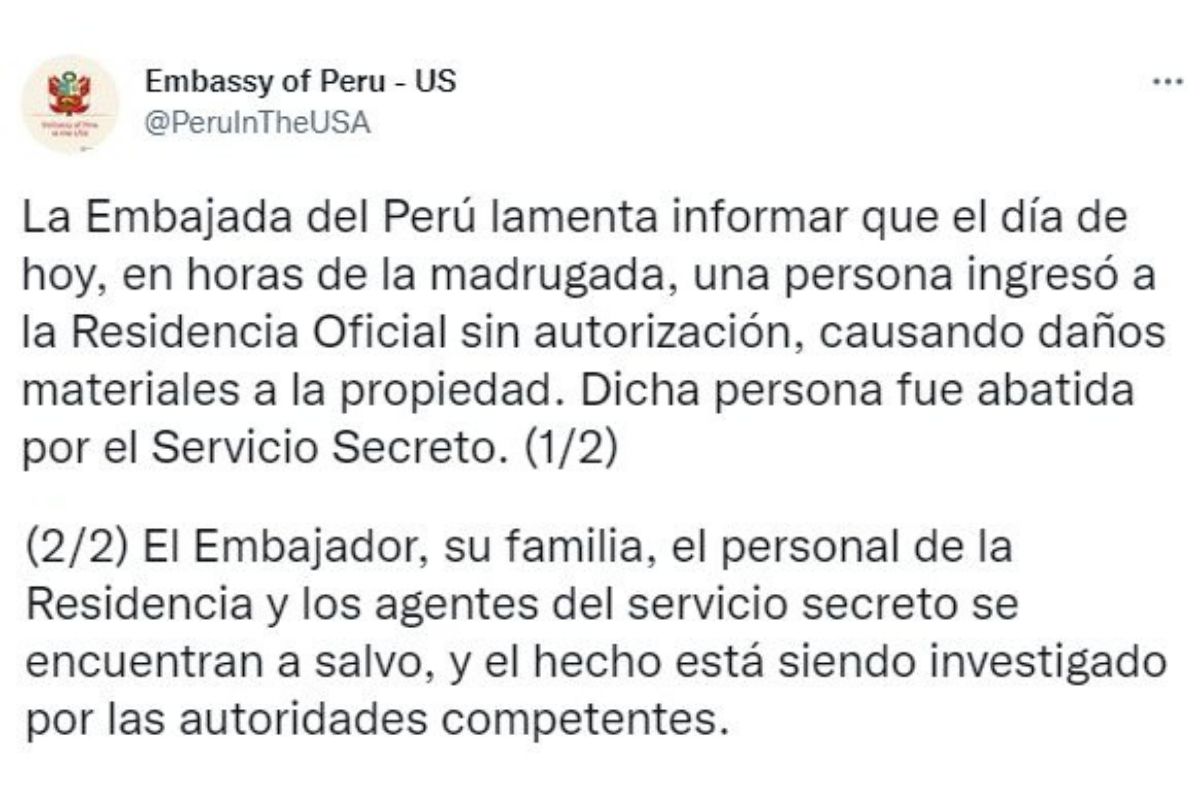 Statement from the Peruvian Embassy in the United States

Bob Barnarda Fox 5 reporter in Washington said the ambassador and his wife were at the residence at the time of the shooting, but were not injured.

The surroundings of the Peruvian Embassy are guarded by police units while investigations into the case are carried out.

The Chief of the Metropolitan Police Department, Robert Conte, He also said it was his family who called 911 after hearing glass was broken. The alert was immediately reported to the Secret Service, whose agents found the man trying to enter the embassy, ​​approached him and then shot him when the stun guns had no effect. 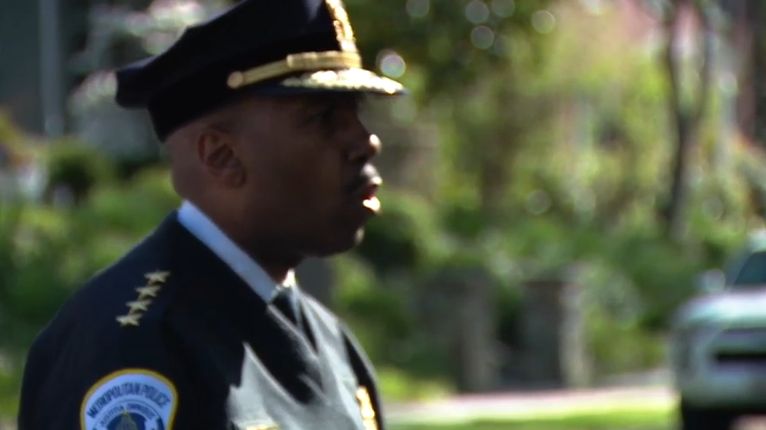 The man was pronounced dead at the scene. He appeared to be in his 20s or 30s, Contee said, adding that “two Secret Service agents were taken to the hospital for evaluation.”

Police and the Secret Service are still investigating the reasons for the illegal search of the intruder, his identification and more details of the assault.

“Members of the Metropolitan Police Department Force Investigation Team are leading the investigation. As an officer was in the shooting, I will work with our apartment, the United States Secret Service, to investigate this,” Robert Contee concluded.

Las Bambas will stop producing copper from this Wednesday due to a conflict with the community of Apurímac
More than 3,000 tourists affected and S / 100 million losses left a regional strike in Cusco
State of emergency in Lima and Callao: restrictions and hours for today, Wednesday April 20, 2022