When Dwayne Johnson took the stage at the 2019 MTV Movie Awards, he starred in a scene that went viral. It was not the grandiloquent spectacle of an army of dancers who mixed breakdance steps with the rhythm of We will Rock You. Nor the film career that crowned “The Rock” with the prize of a Generation. What stood out was what he said. “When I got to Hollywood, they didn’t know what to do with me. He was a half-black, half-Samoan professional wrestler, almost six feet tall. So they told me how it should be.” In front of a giant screen aflame with the letters of her name, her story rocked the Barker Hangar theater in Santa Monica. Applause erupted in unison as this nearly two-meter mass bared its heart in front of the audience. The spectators did not know it: before facing unlikely monsters, the badass of the cinema had to make his place against all kinds of demons off camera. An unstable childhood, depression and a failed career as a professional athlete forced him to hit rock bottom; the Rock had to collapse to build its myth.

On May 2, 1972, Dwayne Douglas came out of Ata Johnson’s womb and faked punching the obstetrician. From that moment, he showed that there was a warlike impulse in his blood. His maternal grandparents, Peter and Lia Maivia, belonged to a dynasty of professional wrestlers from American Samoa, the Anoa’i. His mother fell in love with Rocky Johnson after a match with his brother, Peter, and despite the family’s refusal. The father of “The Rock” had come to the ring after a difficult childhood: “When my father was 13, his father died and he became the man of the house. On Christmas day, his mother brought a drunken boyfriend at home and urinated on the turkey. Seeing him, my father grabbed a shovel, drew a line in the garden and said, ‘If you cross that line, I’ll kill you.’ Confronted by his mother’s girlfriend, he had no choice but to leave the house and search for them alone.After this episode, Rocky fully immersed himself in the world of boxing, training alongside of the likes of Muhammad Ali, but it wasn’t until the 1980s that he made history as part of the World Wrestling Federation’s first African-American team. The gladiators who shared the ring with his father became role models.

One of them was the famous French wrestler André “El Gigante”. His nickname was no exaggeration: in a faded photo, little Dewey poses next to him and does not reach his navel. He was around 10 when he had no better idea than to challenge the giant and tell him that everything in the ring was wrong. André lifted this thin body like a leaf and pointing to the white of his eye, he asked: does that seem so false to you? The episode that marked him with fire and was part of his television series Young Rockinstilled in him a new respect for his father’s craft. Suspend the reality principle, it was the magic of the click. It was a mantra he understood years later: “Fans had to see wrestlers as stars, they had to have a Cadillac and jewelry.” Far from choreographed fights, flashy costumes and glamorous appearances, the financial reality of the family was at stake. 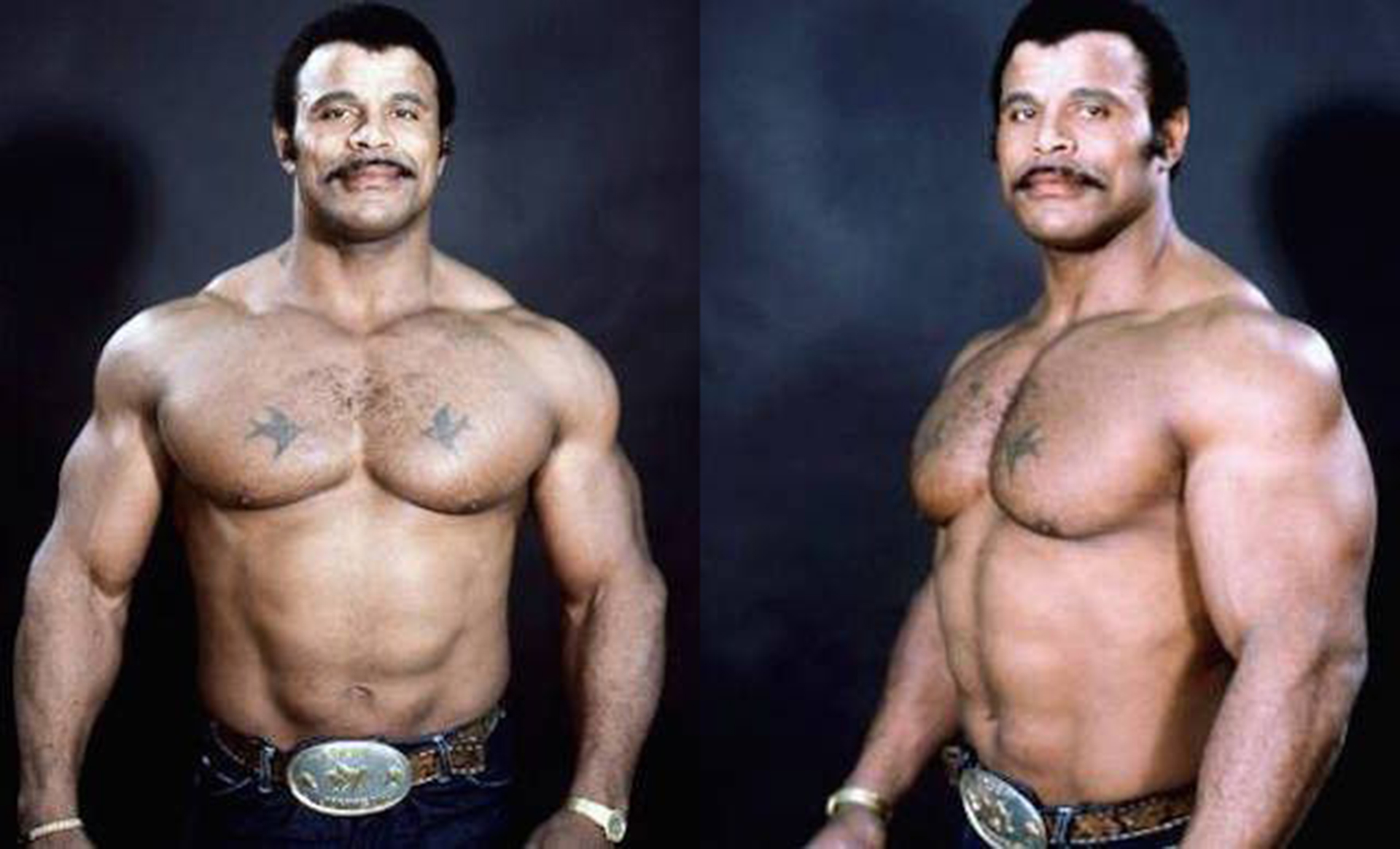 Rocky Johnson, father of “The Rock”, who was a professional wrestler in the 70s and 80s.

In an environment of financial instability and transhumance, his childhood was spent batting. From California to Honolulu, the Johnsons have often stayed in hotels if not trailers following in Rocky’s footsteps. Or rather, the rings of their battles. Along with his partner, Tony Atlas, they secured the first WWF Championship belt in 1983. The duo known as Soul Patrol was doing well and was a novelty. Despite his success in the ring, he couldn’t get the minimum $120 a week his wife and son needed to live on.

At 14, Dwayne watched the family crumble the day he arrived home to find an eviction notice hanging on his door. “My mum started crying. She just started crying and breaking down. ‘Where are we going to live? What are we going to do?'” The teenager who was already shaping his muscles in the gym started parading around Waikiki police stations when he joined a gang of thieves. High-end tourists strolling through Chanel, Prada and Gucci stores were prime targets to make money from the jewelry and luxury items they sold. So he tried to contribute to the household accounts but couldn’t prevent his mother’s collapse.

Overwhelmed by debt, constant moving and foreclosures, Ata Johnson soon fell into a deep depression. After losing her apartment in Nashville, she attempted suicide in front of her son. “She got out of the car on Interstate 65 and into traffic,” Dwayne recounted several years later, “I grabbed her and pulled her back down the gravel road.” The drama of this episode was erased from his memory but remained indelibly on the 15-year-old boy. Depression was a constant seat for Dwayne, not only for his mother’s health but for his own as well.

Like his father, he had a difficult adolescence. He had already had a series of arrests for theft and been expelled from four different schools when he realized that his muscles were going to be his most powerful weapon. “The only thing I could do was train. The successful men I’ve known were men who built their bodies.” With a muscle mass that thickens his meter 95, at 16 he finds in American football a passport to a more promising future. It all started with an altercation in the teachers’ bathroom at Freedom High School in Bethlehem. “Hey, you can’t be here,” intercepted the football coach. The professor’s fury quickly dissipated to offer him the opportunity that changed the course of his life. From troublesome kid to standout athlete, Dwayne won a scholarship to the University of Miami and became one of the star defensive tackles. But 39 games, 77 tackles and a national championship weren’t enough to save him from depression. 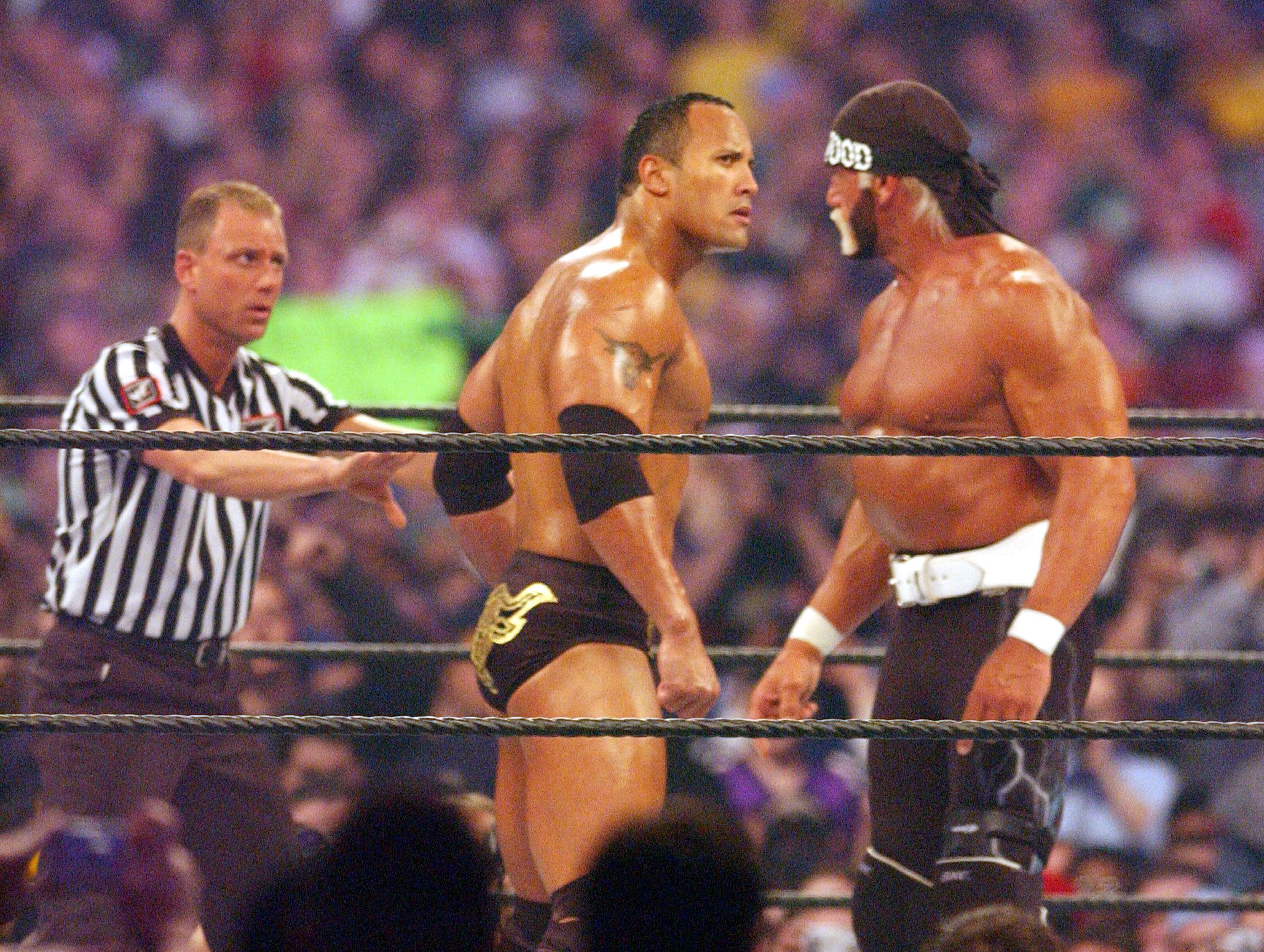 Fighting Hulk Hogan during his years as a professional wrestler. The WWF would make him a star (George Pimentel/WireImage)

In 1995, he graduated from college and found himself with an uncertain outlook. The injuries he had accumulated on the field of play and a declining performance left him on the verge of apathy: “I didn’t want to do anything, I didn’t want to go anywhere. I was constantly crying.” A year after signing with the Canadian Soccer League, he was “released” from the contract. The breakup with his girlfriend sank a little deeper in his mind. With lukewarm prospects in professional football , he decided to rediscover the family tradition.

As he attempted to rebuild his athletic career, he first set foot in the WWF in 1996. Matching his parents’ line, “Ricky Maivia” made his Texas ring debut by pinning his opponent on the ground with a master key. The breath that we did not find in the public of the stadium, demanded with fanaticism with each shot in the ring. After a knee injury that sidelined him for good, he threw himself into the wrestling code. He wore spandex, growled at the camera and talked about himself in the third person. The Rock is there: naked, immense and charismatic. 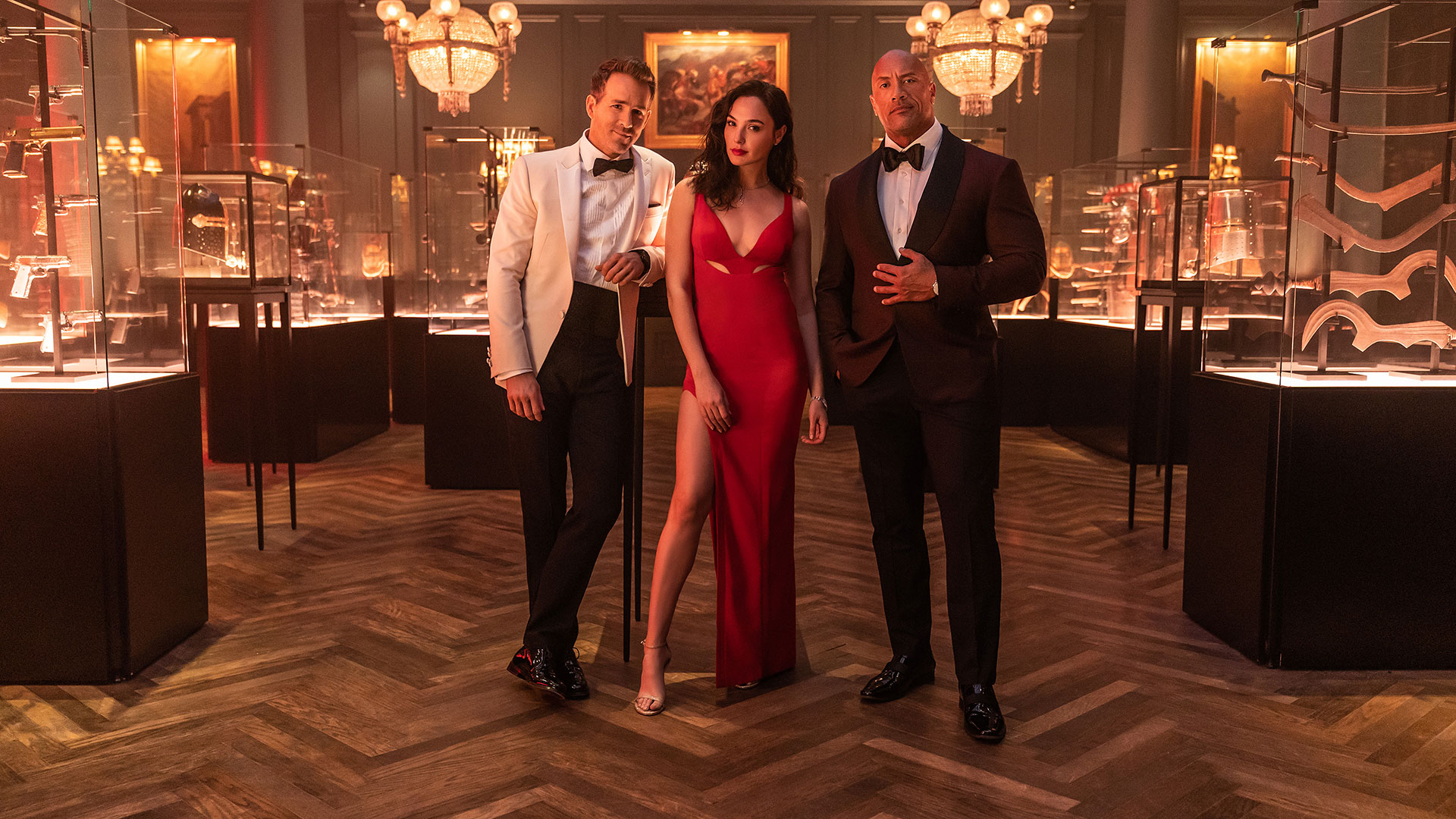 In a decade of takedowns, locks, and leaps through the air, Dwayne Johnson has conquered the public as well as eight World Wrestling Entertainment (WWE) championship titles. Acting seemed like a logical step and it was only a matter of time, but his appearance seemed to be an issue for the agents: “‘You have to lose weight,’ ‘you have to be someone different,’ you gotta stop going to the gym, ‘you gotta stop calling yourself ‘The Rock'”. I can’t hear you. Back in 2001, Hollywood needed someone who could play a mid- man, half-ghost for the movie “The Mummy Returns.” Was there anyone better? It was the start of a meteoric career full of self-aware dialogue, fast cars, doomsday scenarios, giant dinosaurs and gorillas.

In 2017, he climbed on the podium of the highest paid actor in the world. And he took another leap into the void when he threatened to run for president in 2020 (he would later give up and announce his vote for Biden). When he saved enough money to buy a house, he surprised his mother for Christmas. Ata Johnson was finally going to have her own home, and so was Dwayne. A year later, he finished telling his story at the MTV gala: “So I made a decision, I wasn’t going to adapt to Hollywood, Hollywood was going to adapt to me”, he finished. his speech with the award in hand. His prediction had come true.