“There is a subject on my experience in Lost in the Tribe. We were one of three families selected after more than 6 casting stages (Flia. Moreno, quadruplets),” began Alan Moreno to recount on Twitter his passage with his parents and his three brothers in the reality TV show Telefe hosted by Mariano Peluffo, in 2012. In his more than 30 tweets, the young man who is now 27 years old told how difficult it was for them to adapt, the harsh rituals they had to go through and the feeling they had when they left Ethiopia.

“We arrived in Ezeiza without knowing the destination. Bags in hand, almost ready to board the plane, I had to choose between 3 envelopes that randomly contained 3 countries. Ethiopia. We were going to spend a month with a tribe from Africa. We traveled over 30 hours, passing by plane, small plane, truck and boat until we reached the Hamer tribe. To give you an idea, its location does not exist on any map. We were received by Bali, the leader of the tribe and all the members singing and jumping madly. Goosebumps,” began her recollection of the weirdest trip she could imagine. 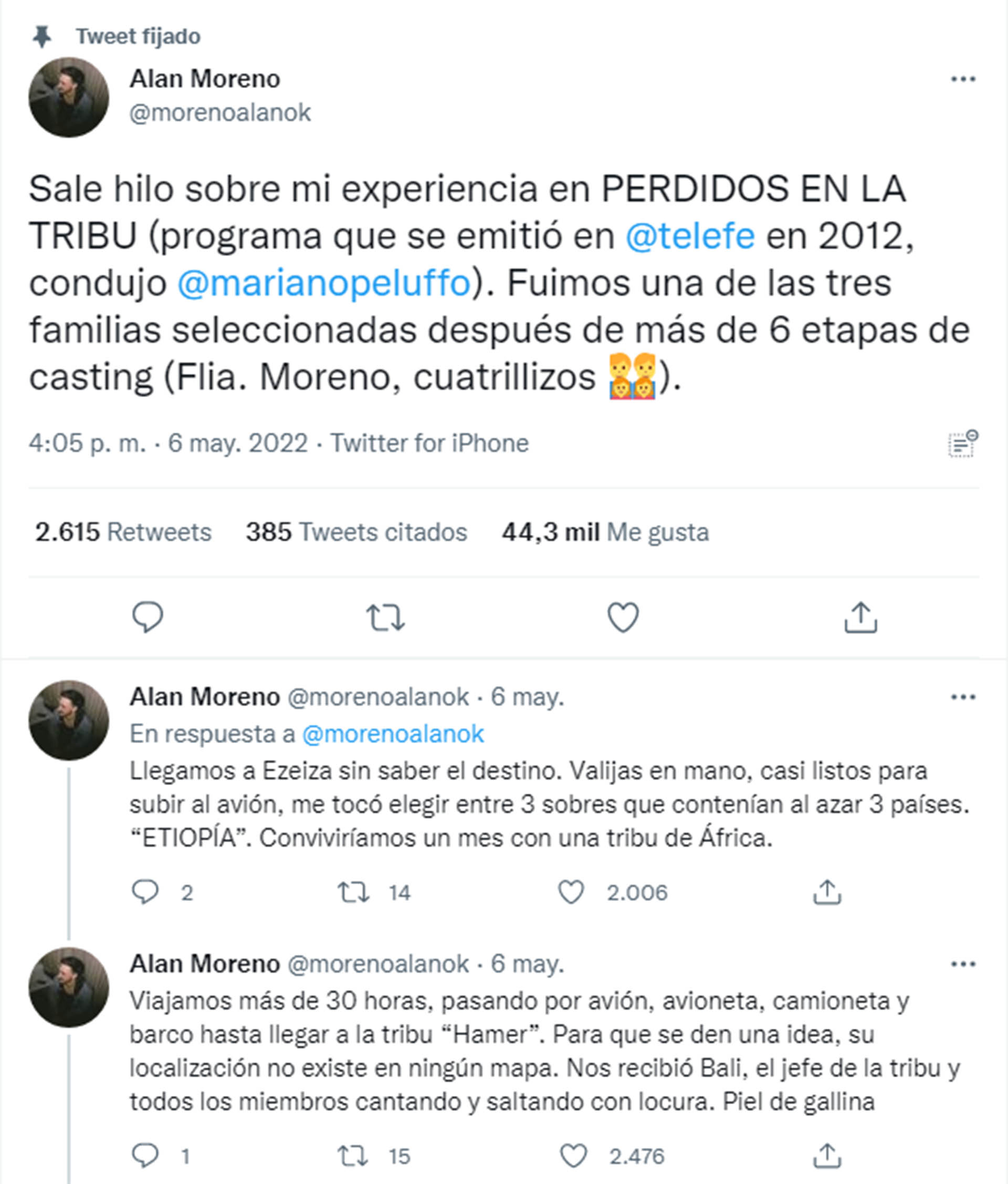 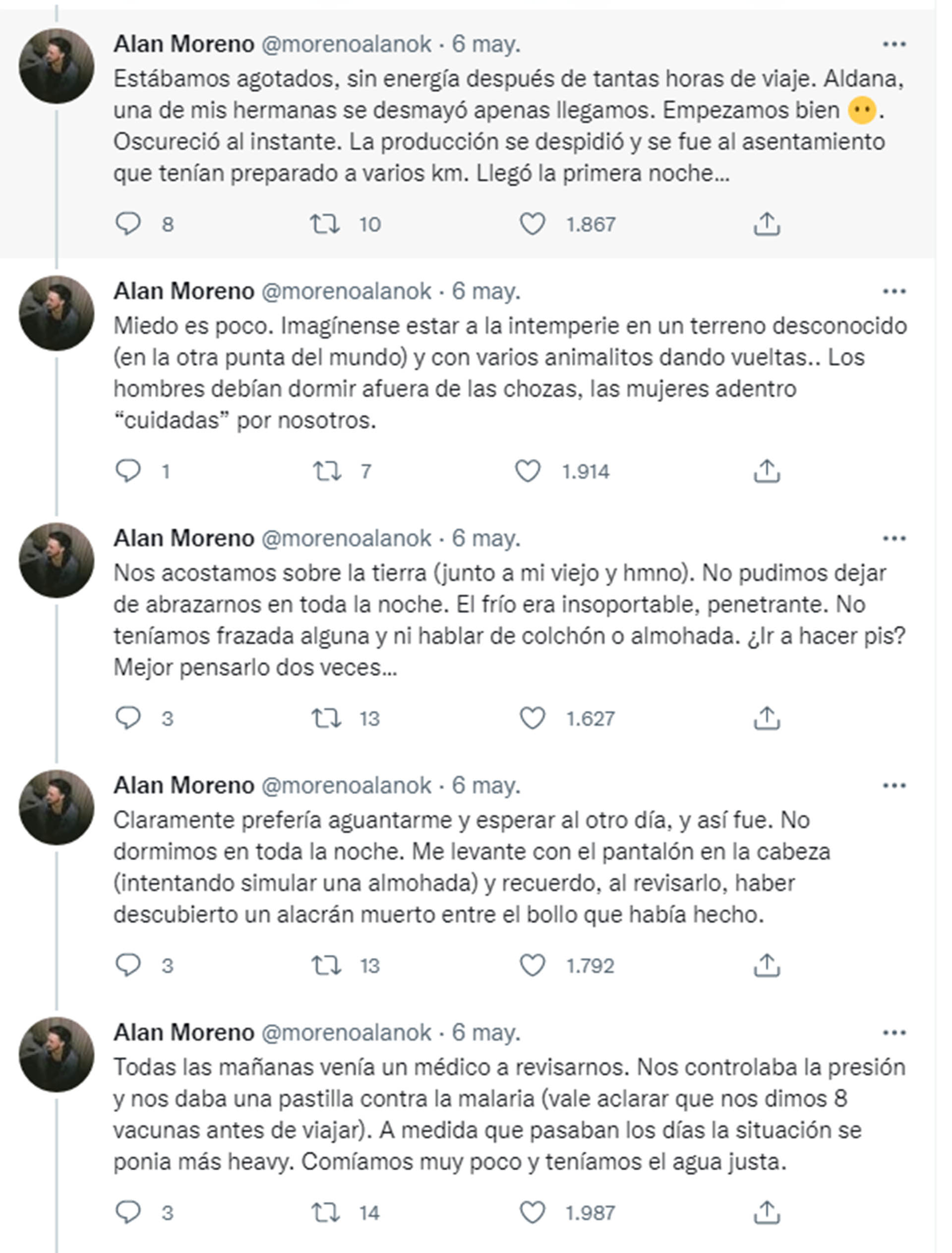 At that time I wasn “exhausted and without energy”, so his sister Aldana passed out. “We started well . It was instantly dark. The production said goodbye and drove to the camp they had prepared several miles away. The first night has come…”of which he does not keep the best of memories: “Fear is little. Imagine being out in the open on unfamiliar terrain (at the other end of the world) and with several small animals circulating.. The men had to sleep outside the huts, the women inside, “looked after” by us. We lay down on the ground (next to my old man and my brother). We couldn’t help but hug each other all night. The cold was unbearable, penetrating. We had no blankets, let alone a mattress or a pillow. Go pee? Better think twice. Clearly, I preferred to suck it and wait for the next day, and so it was. We haven’t slept all night. I got up with my pants over my head (trying to fake a pillow) and I remember checking it out to find a dead scorpion in the bun I had done.”

After the difficult nights, in the morning a doctor came to check them every day: “He checked our blood pressure and gave us a malaria pill (it should be noted that we gave ourselves 8 shots before traveling). As the days passed, the situation worsened. We ate very little and had just enough water. It is that, according to what he said, the tribe lived on sorghum (food for the cattle) and it was very difficult for them to eat it: “It tasted like dirt. Many days we prefer not to eat. It has become unbearable. At that time, after a week, I started dreaming about food.

On the eighth day, they were to perform the ritual of slaughtering the goat: “It was up to us, as men, to kill him, knock him down and cook him. As a member of the tribe, everyone had to draw blood from the dead animal. They associate it with strength and energy… “With hunger they were sure they had killed the animal of desire”, obviously a lie. Because of the voracity with which we ate, two of my brothers were ill. Lucas convulsing, Nicole fainted, her face hurt from the fall. 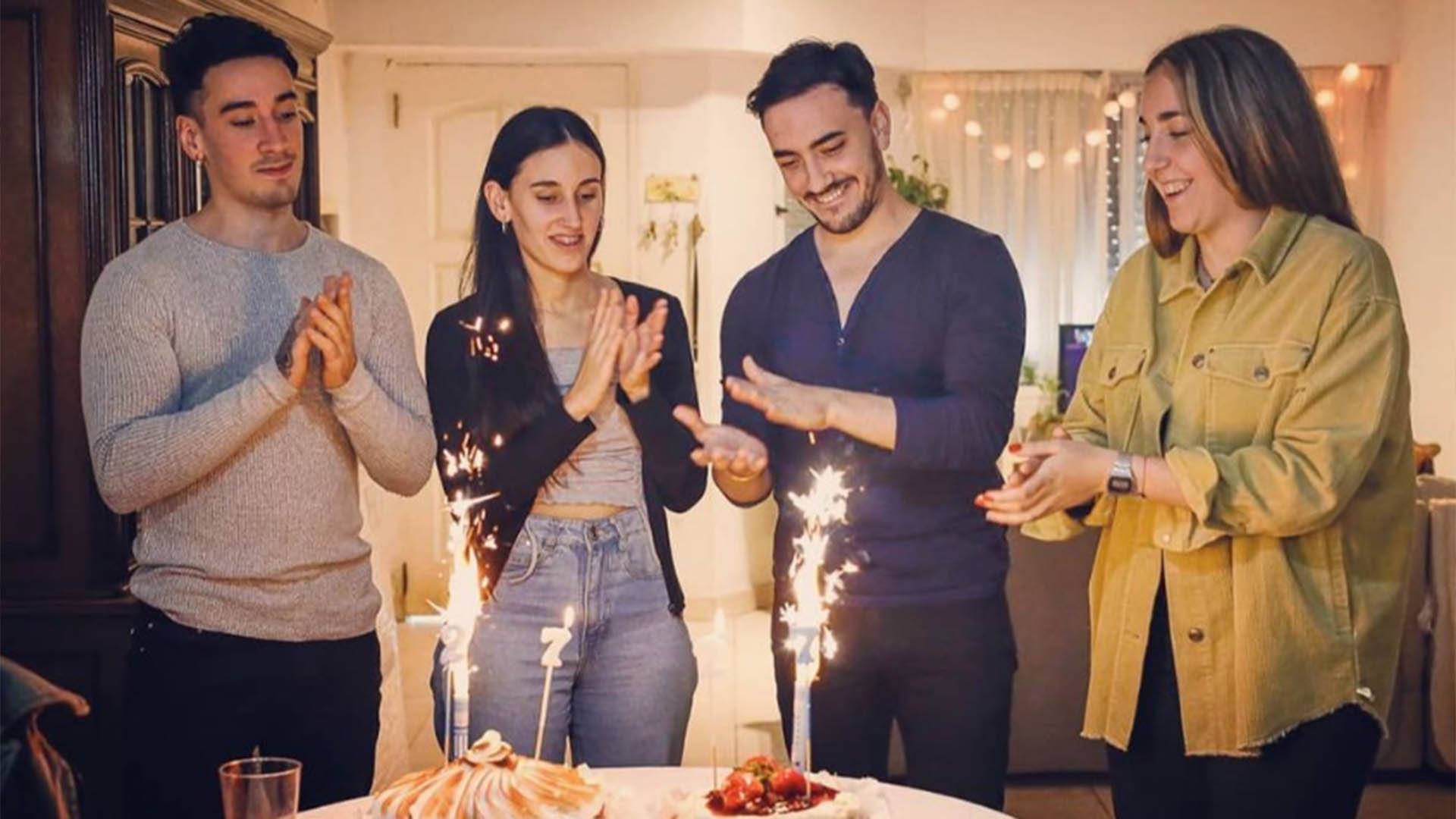 Alan recalled that at that time they had been scared, they called the doctor and that, fortunately, “the thing did not get worse”, but “every day everything became more intense” and “the lack of sleep and food was noticeable”.

Have you thought about going back? “Resigning meant having to reimburse all travel, hotel and other expenses that the production had had, in addition to losing the possibility of winning the prize: 300,000 pesos to be divided among the winners. We decided to go ahead. We still had three weeks ahead of us. I remember counting the days with sticks; it was a countdown to get back to our life before, we were having a really bad time. We continued with our usual clothes (although still the same because they had taken everything from us)”.

Without eating and without sleeping, they could not clean themselves either: “We brushed our teeth with the little water we collected each day. Swim? There was no chance. We used the water to drink because it was very, very little. I always say it’s the only time in my life that I really I felt hungry, thirsty and dirty. However, he assured that “later it was worth it”.

It is that in the meantime, they were forging a relationship which he described as “very strong” and recalled: “Aike, Shada, Lendele, Bali, Azi, Daina, Tadele, some of the names with which we were all days. You remember Shada, don’t you? Especially my sister Nicole. Love was born. Was it real? She will know how to answer it better, but no doubt that nothing was armed. Nothing that was seen on television was programmed. Neither the relationship, nor the anger, nor the crying. 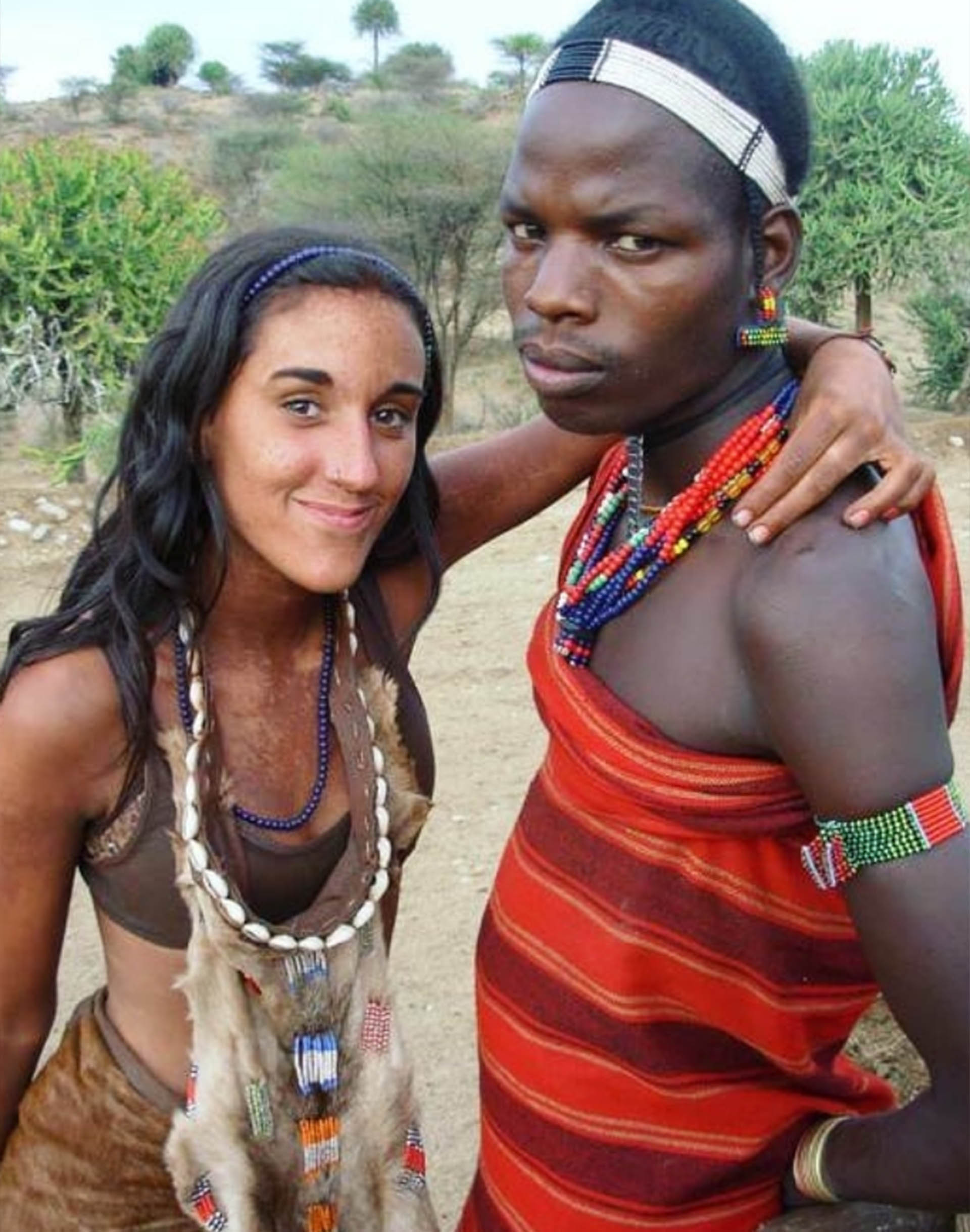 Nicole and Shada, lost in the tribe

One of the hardest days for the family was the ritual “salto al toro”: “The teenage men have to jump naked on the backs of 30 crowded bulls, passing from side to side several times. With this they achieve the passage to adulthood. We were 17 We had to. Before, Teen Family Women Get Spanked. Before leaving, the production warned us to be very careful, it was a very dangerous ritual. We arrived and the little tribe we knew grew into thousands and thousands of them. The men were desperate to whip. It was one of the most dangerous moments of the whole experience. They grabbed my two sisters by the arm, they understood that if they were there it was to be whipped. They were saved by the chief of the tribe, Bali, who warned us that we were his ‘proteges’”.

“It was jump time for my brother and me. We wanted to do it but my parents were scared. Naked, without energy and with the risk of falling on one of the horns of the 30 bulls that were on it. They didn’t let us. The chief of the tribe became very angry. It was our obligation, we had no choice. At this moment We were already with their clothes (a simple blanket for men and cloth for women). They had stripped us of the last aspect of the West that we had left.account.

At that time, he was already 8 kilos below his usual weight and had already gone through another difficult time: “They punished me for losing three goats and forced me to collect honey from a honeycomb in a very large tree. Protection? Luck… They used the smoke to scare away the bees. I had to climb as best I could and get down the hive.

Speaking another language, they learned the basic words, even if at first it was only signs: “Later, we came to understand each other as a family. The days passed and we were nearing the end. We continued to resist. The relationship between Shada and my sister grew stronger every day. We were starting to get attached. What started out as an ordeal started to turn into something different. We struggled with the idea of ​​leaving. We wanted to go home to friends and family, but we didn’t want to leave him.” 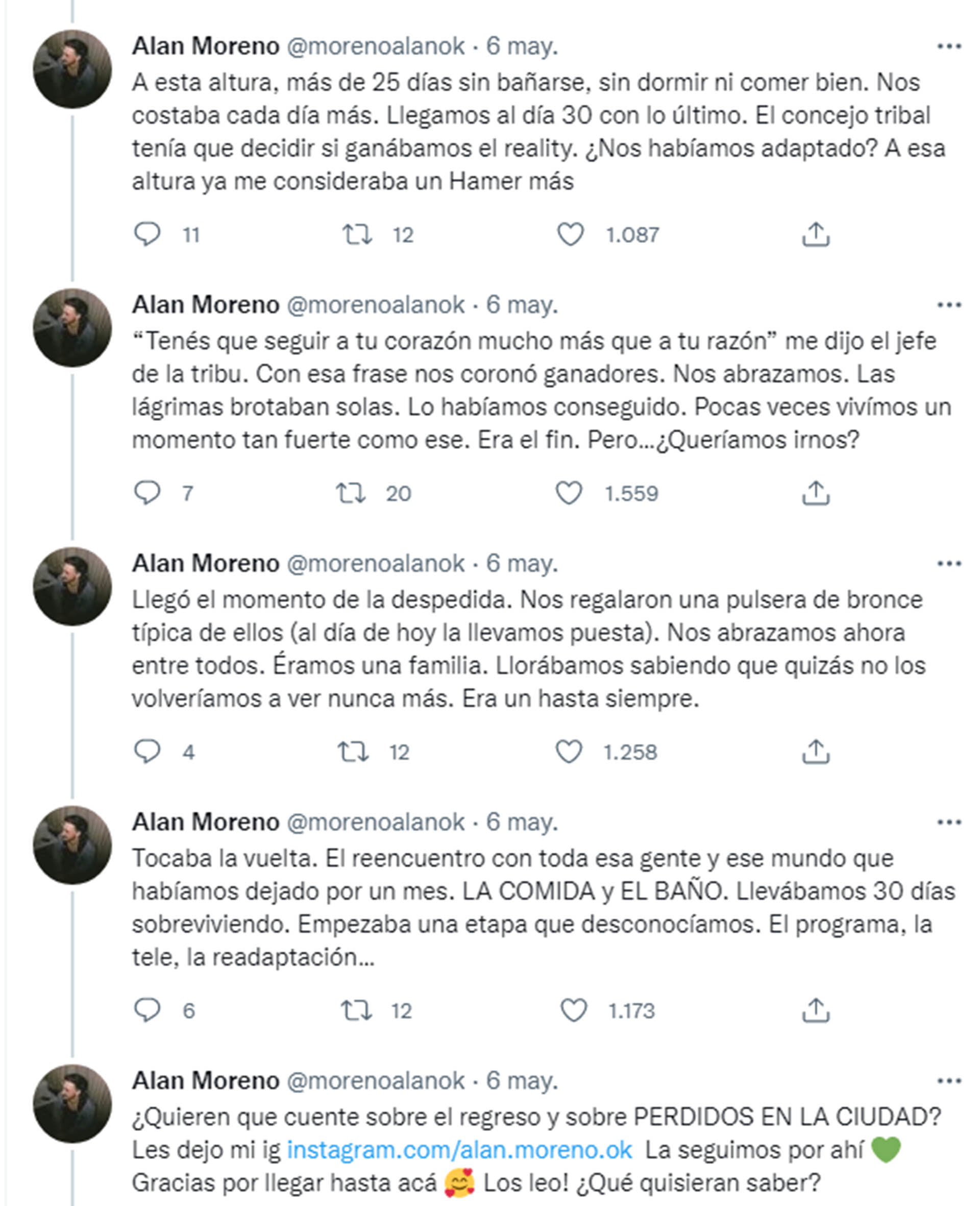 “At this point, more than 25 days without bathing, sleeping or eating well. It cost us more every day. We got to day 30 with the last one. The tribal council had to decide if we would win the reality show. had we adapted? At that time, I already considered myself another Hamer. ‘TYou have to follow your heart much more than your reason,” the chief of the tribe told me. With this sentence, he crowned us victorious. We are kissing. The tears flowed by themselves. We had. We rarely live a moment as strong as that, ”he recalls how they won.

“It was the end. But… did we want to leave? It was time to say goodbye. They gave us a bronze bracelet typical of them (to this day we wear it). We kiss now. We were a family. We cried knowing that we might never see them again. It was an eternity. It was time to turn around. The reunion with all these people and this world that we had left for a month. The food and the bathroom. We had survived for 30 days. A stage that we did not know has begun. The program, the TV, the rehabilitation…”, Alan closed his story on how it happened with his brothers Aldana, Nicole and Lucas and their parents Guillermo and Lila.

In addition to them, he traveled the Funes family (mother, father and two brothers) in Indonesia, with the Mentawai tribe and the Villosladas (mother, mother and two sisters) who were in Nambia with a Himba tribe.