Skip to content
Photograph from October 13, 1917, during the so-called “miracle of the sun”, in which many said the sun was dancing

Every May 13, the Virgin of Fatima is commemorated, rather, the apparition of the Virgin Mary in Cova da Iría, near the city of Fátima, in Portugal. The apparitions are considered by the Catholic Church private disclosures. In the Catechism of the Catholic Church, in the first part of article 67, we read: “During the centuries there have been so-called private revelations, some of which have been recognized by the authority of the Church . These, however, do not belong to the deposit of faith. yesIts function is not to improve or complete the definitive Revelation of Christ, but to help to live it more fully at a certain moment in history. Guided by the Magisterium of the Church, the spirit of the faithful (sensus fidelium) knows how to discern and welcome what constitutes in these revelations an authentic call from Christ or his saints to the Church”.

The witnesses of this apparition were three little shepherds, in 1916. Lucía dos Santos, ten years old, and her cousins, Jacinta and Francisco Marta, respectively six and nine years old, had lived three times, during the spring and summer of that year, an angelic presence while grazing their sheep. It happened twice in Loca do Cabeço, in Valinhos, and once in Pozo do Arneiro, at Lucía’s, in Aljustrel. He introduced himself to children as the Angel of Portugal. They later saw it as preparation for the visits of the Virgin Mary they were to have between May 13 and October 13, 1917. 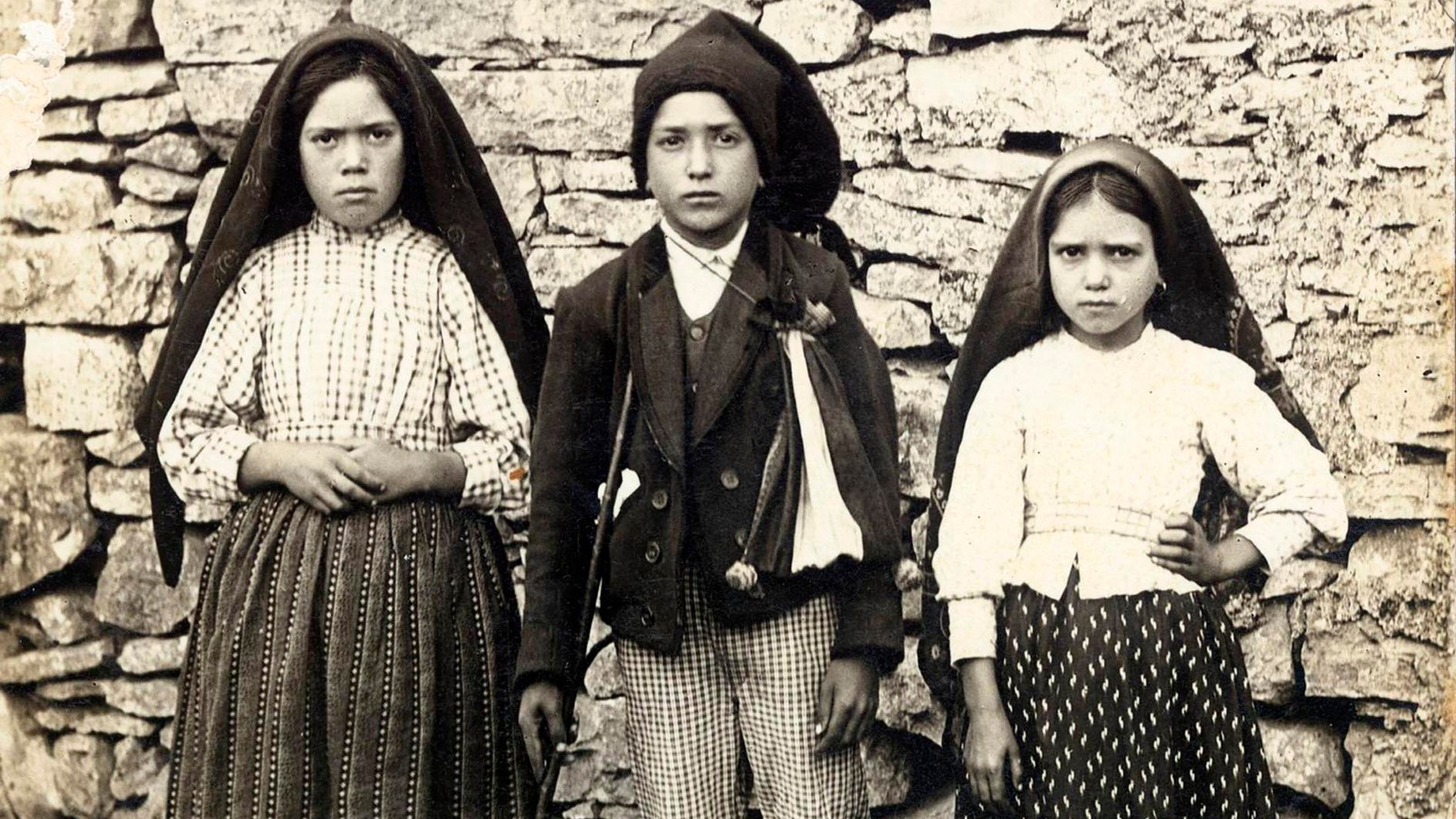 They were no more than 10 years old, Lucía, Francisco and Jacinta were the three shepherds who reported the apparitions of the Virgin

One Sunday, May 13, 1917, the little shepherds headed with their sheep towards Cova da Iria, near their town of Fátima in Portugal. Around noon, they heard a loud clap of thunder which filled them with fear, considering that the day was sunny and cloudless. They believed that behind the hills a terrible storm was brewing, so they started rounding up the sheep; yet another noise shocked them, and there on a small oak tree the children saw a woman hanging over the bush, who asked them to return to the same place for five months. Francisco could see the lady but couldn’t hear what she was saying. In this summary the dialogues are transcribed:

– And what do you want? Lucia asks.

“I came to ask you to come here, six months in a row, on the 13th at this very hour. Then I will say who I am and what I want. So I will come back here a seventh time.

When the children arrived home, they told their parents what they had witnessed. Lucía’s parents didn’t believe her, but Jacinta’s and Francisco’s did.

On June 13, there were already about 50 people gathered there. There the lady says:

– What do you want? Lucia will ask again.

–I want you to come here on the 13th of next month, say the Rosary and learn to read. So I’ll say what I want.

–I wanted to ask him to take us to paradise (Lucía asks him).

-Yes; Jacinta and Francisco will bring them to me shortly. But you stay here a little longer. Jesus wants to use you to make me known and loved. He wants to establish devotion to my Immaculate Heart in the world. 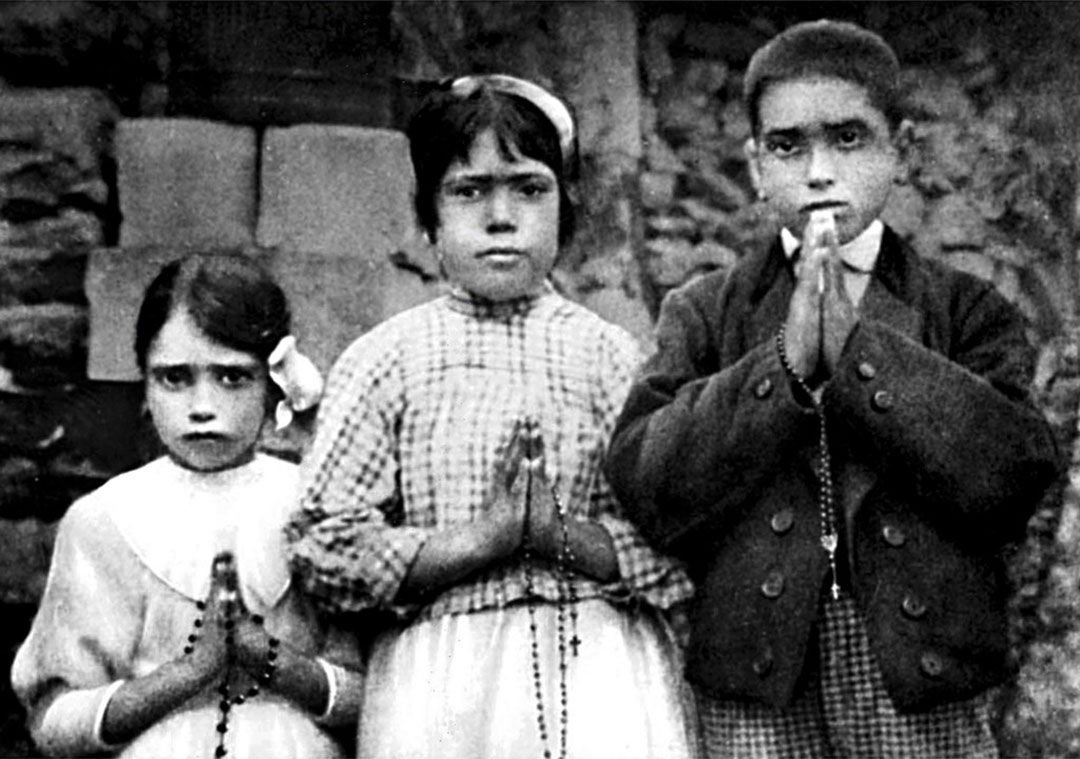 So that was it. Francisco and Jacinta Marta fell ill in December 1918. Francisco did not recover and died on April 4, 1919. Jacinta’s health improved somewhat, but soon after she developed purulent pleurisy and was admitted to hospital of Vila Nova de Ourém in the summer of 1919. Moved to Lisbon, she died on February 20, 1920. Instead, Lucía dos Santos lived to be 97. He died on February 13, 2005. His life was devoted to religion. Over time, she became Sister Maria Lucia of Jesus and of the Immaculate Heart. She entered the school of the Dorotea sisters in Vilar, near Porto and professed as a Dorotea nun in Tuy (Pontevedra), where the Virgin also appeared to her in 1925.. In 1946 she returned to Portugal and, two years later, she entered the Carmel of Santa Teresa in Coimbra, where she was confined in this convent, taking up the habits of a Discalced Carmelite on May 31, 1949. There he wrote two volumes with his Memoirs and the Appeals of the Message of Fatima and it was there that he died.

On July 13, the crowd was already overwhelming, during this appearance the Virgin said to them:

–I wanted to ask you to tell us who you are and to perform a miracle so that everyone believes that you appear to us – said Lucía.

–Keep coming here every month. In October I will say who I am, what I want, and I will perform a miracle that everyone can see, believe.

It was during this apparition that the Virgin transmitted to the children the so-called “secret of Fatima”, which was made known by the Holy See during the pontificate of John Paul II.

Every month the number of people increased, and on the long-awaited day, October 13, 1917, when the lady last appeared in Fatima, there were about 50,000 people. And the dialogue was as follows:

– I want to tell you to build here a chapel in my honor, that I am the Lady of the Rosary, to always continue to pray the Rosary every day. LThe war will end and the soldiers will soon return home.

– I had many things to ask him: if he healed the sick and if he converted sinners, etc.

– Some yes, some no. They need to make amends, to ask forgiveness for their sins.

And taking on a sadder aspect:

– Do not offend Our Lord who is already greatly offended!

And, opening his hands, he made them reflect on the Sun, and rising, he continued the reflection of his own light projecting on the Sun.

This moment was called the “Miracle of the Sun”, witnessed by 50,000 people who saw the sun “dance” or “zigzag”, turn towards the Earth or emit multicolored light and radiant colors. According to reports, these supposed events lasted about ten minutes. Secular journalists, government officials and skeptics have been able to verify the phenomenon. That day, it had rained in torrents on the Cova da Iría and at the end of this event, everything was perfectly dry. Pope Pius XII had witnessed the miracle of the sun from the Vatican gardens. 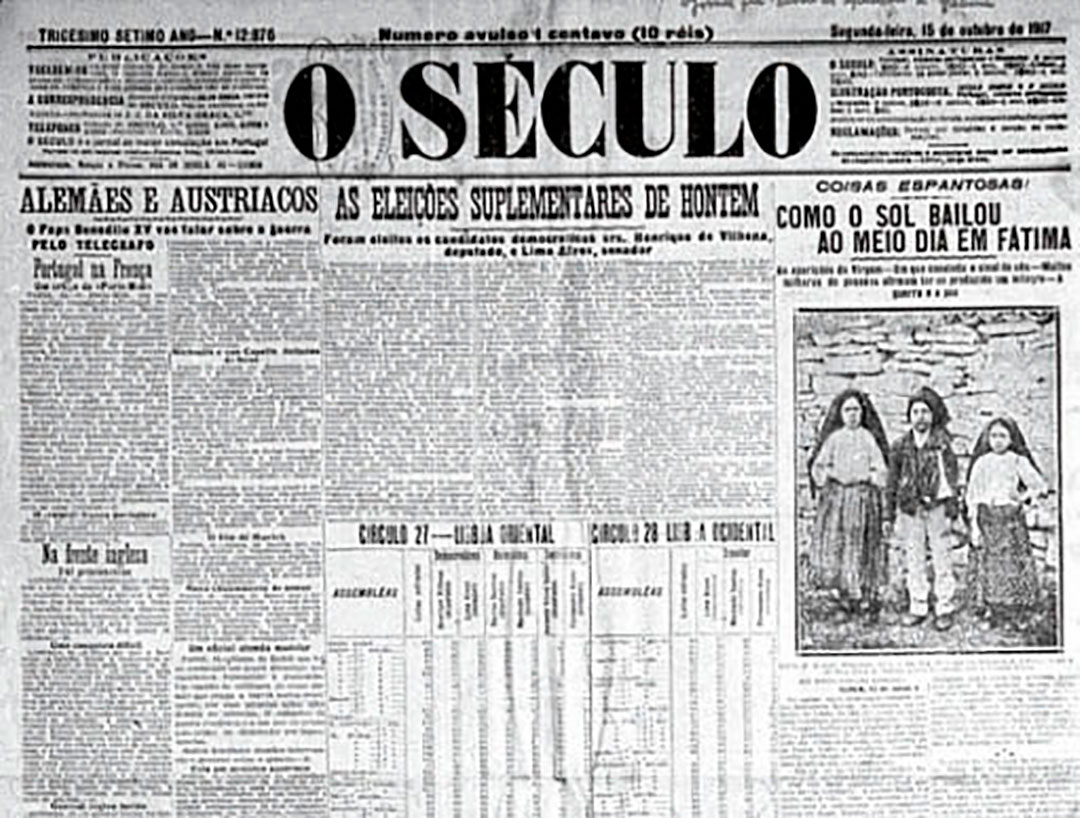 “How the sun danced at noon in Fatima”, headlined the newspaper O Siglo, about the miracle witnessed by a crowd

After this miracle, on April 28, 1919, the construction of the chapel of the apparitions began; On October 13, 1921, mass was authorized for the first time. On October 13, 1930, the Bishop of Leiría declared the apparitions trustworthy and authorized the cult of Our Lady of Fatima. On May 13, 2000, Pope John Paul II beatified Francisco and Jacinta and they were canonized May 13, 2017 by Pope Francis.

The Three Secrets of Fatima

Two of the secrets were revealed in 1941, in a document written by Sr. Lucía, while for the third the bishop of Leiría ordered Lucía to put it in writing to present it to the pope. The text of the third secret was revealed by Pope John Paul II on June 26, 2000.

The first secret: a vision of Hell. “Dipped in this fire all demons and souls, as if they were transparent and black or tanned embers in human form, which floated in the fire carried by the flames issuing from it, with clouds of smoke, falling on all sides, like the fall of sparks in great fires, without weight or balance, between cries and groans of pain and despair, which horrify and make one tremble with fear.The demons were distinguished by their horrible and disgusting forms of hideous and unknown animals, but transparent and black. 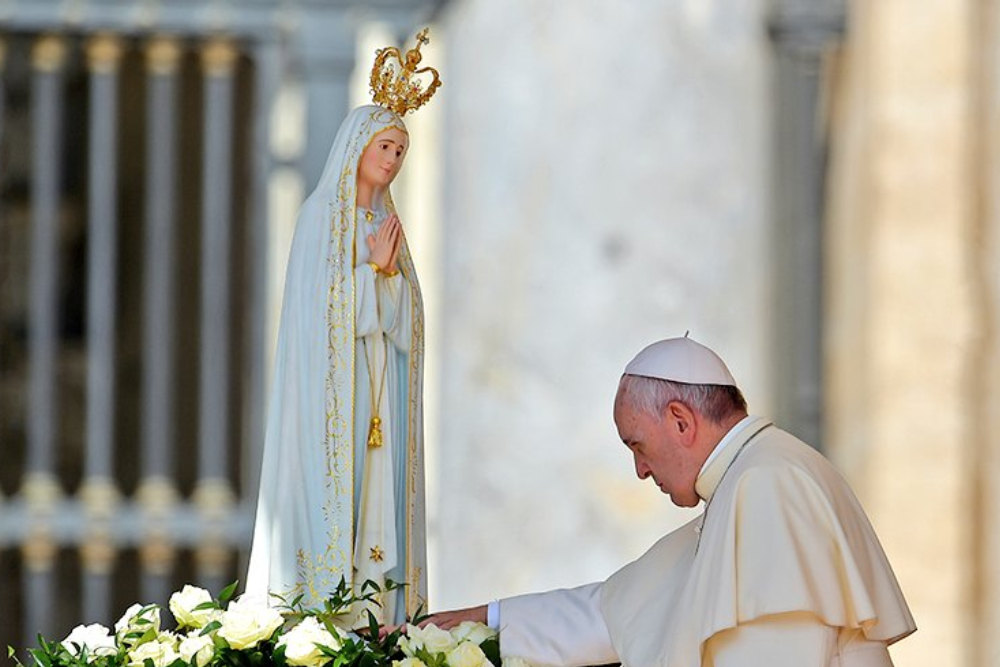 The second secret. How to save sinners from hell and pray for the conversion of Russia and the announcement of a new war. “If you do what I say, many souls will be saved and you will have peace. The war will end, but if they don’t stop offending God, another worse one will begin during the reign of Pius XI. When you see a night lit by an unknown light, know that this is the great sign that God is giving you that he is going to punish the world for its crimes, with war, famine and persecution of the Church and the Holy -Dad. . To prevent it, I will come to ask for the consecration of Russia to my Immaculate Heart, and the reparatory communion of the first Saturdays. If you listen to my requests, Russia will convert and you will have peace. Otherwise, he will spread his errors all over the world, promoting wars and persecutions of the Church, the good will be martyred, the Holy Father will have much to suffer, various nations will be annihilated, finally my Immaculate Heart will triumph.

The third secret. It was revealed by Pope John Paul II during the beatification ceremony of Francisco and Jacinta. He had announced through his Secretary of State, Cardinal Angelo Sodano, that he would make the text of the third secret public. Sister Lucia participated in the ceremony. Months later, the text was published by the Holy See, along with an analysis of the meaning. The text says:

“And we saw in an immense light, which is God, something similar to the way people look in the mirror, when a bishop dressed in white passed by. We had the feeling that it was the Holy Father. We saw several other bishops, priests, monks and nuns climbing a steep mountain, on top of which was a large cross, with a rough trunk, as if it were cork oak like the bark. The Holy Father, before arriving there, passed through a large city, half in ruins and half trembling, walking with a hesitant step, heavy with pain and pain. He was praying for the souls of the corpses he had found along the way. Arrived at the top of the mountain, prostrate, on his knees at the foot of the cross, he was killed by a group of soldiers who fired several shots and arrows at him, and in the same way the bishops, priests, religious and women died one by one. after the others and several lay people. Gentlemen and ladies of different classes and positions. Under the two arms of the cross were two angels. Each with a glass jug in his hand, collecting in them the blood of the martyrs and irrigating with them the souls who have approached God”. 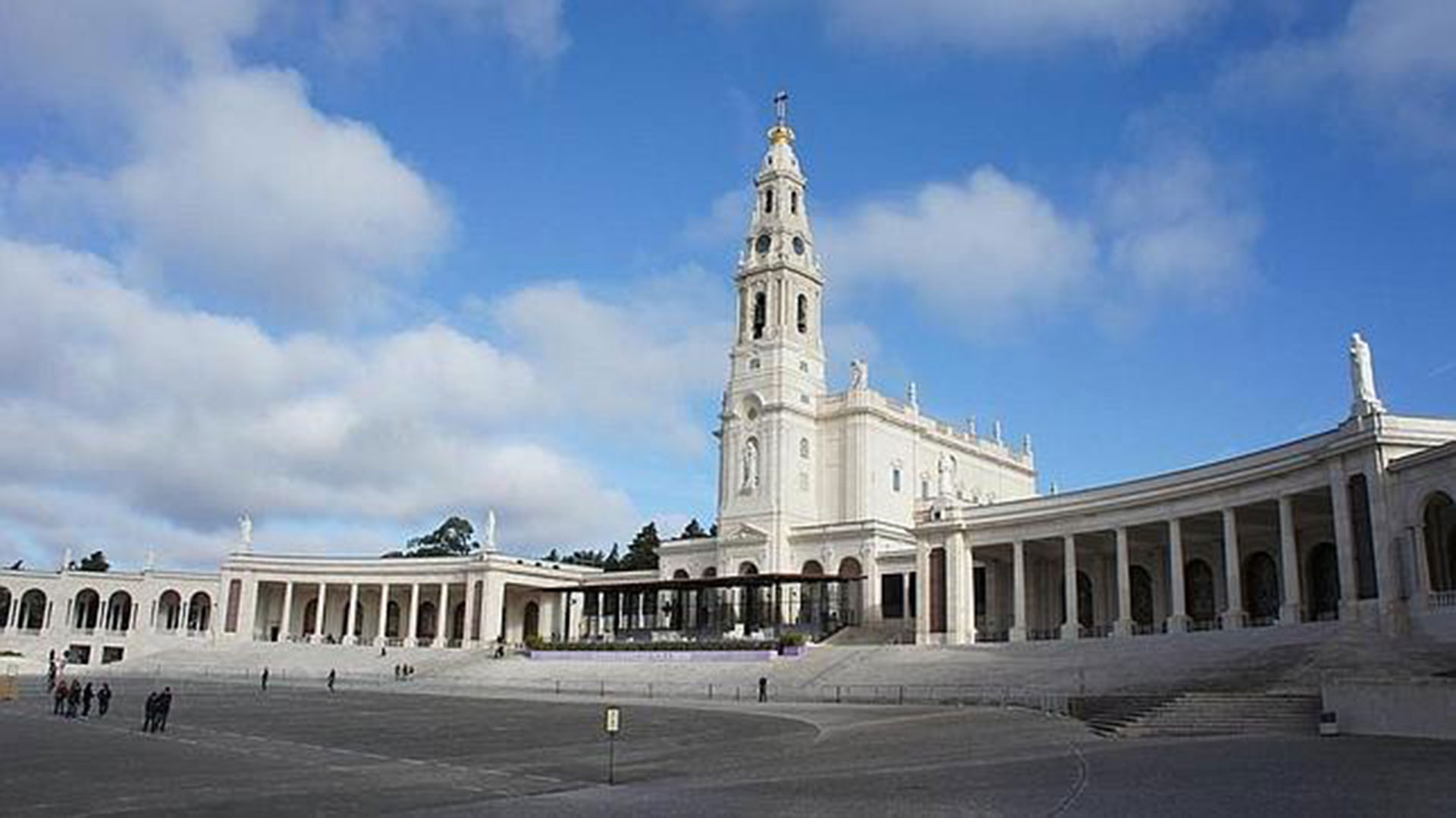 The sanctuary of Fatima erected where the virgin had requested it

For Cardinal Joseph Ratzinger (future Pope Benedict XVI), no great mystery has been revealed; the veil of the future is not drawn. “We see there the Church of the martyrs of the century which has just passed represented by a scene described with a symbolic language difficult to decipher”, he assured.

The stories and dialogues included in this note are told by Sr. Lucia in: “Memorias da Irmã Lucia I. 14th ed. Fatima: Secretariat dos Pastorinhos, 2010, p. 172-173 (IV Memory); the section in parentheses belongs at the questioning of the priest to the seers, May 27, 1917; in Critical documentation of Fatima”.